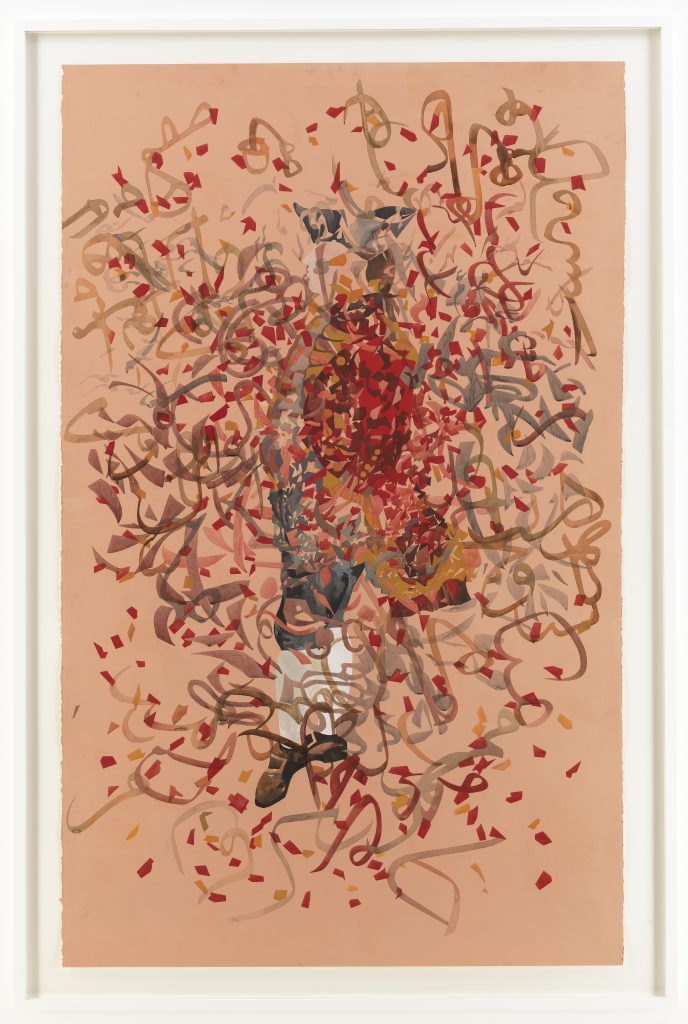 Explosion of the Company Man, Series 1

Explosion of the Company Man, Series 1 is part of a larger series that explores Sikander’s ongoing interest in colonial history in the Indian subcontinent and in the British opium trade with China. Throughout the series we see an East India Company worker who appears in various forms and is the ‘exploding man.’ This piece is among the larger works in the series, which included miniatures and animations, referring to how the East India Company’s strategies from the seventeenth century continue to inform commercial activities today. Behind the blood-red flesh like dotting on the paper, we see what seems to be a Western, presumably British General in uniform with culottes and a hat. His face, in profile, appears to have the poise and posture of a nobleman, dignified in stature. The explosions that are superimposed over his fading figure draws the mind to Arabic script. The conversation between these two symbols in the painting evokes questions of authority, socio-cultural and political relations, and the memory of colonial legacies.

Shahzia Sikander is known for her richly layered and intricately detailed graphite, ink, and gouache paintings. She studied miniature painting in the late 1980s at the National College of Art in Lahore, Pakistan, with the forms and techniques of Indo-Persian miniatures heavily influencing her approach. Sikander’s practice explores the concepts of “East” and “West,” using traditional strategies of storytelling and themes of popular mythology to deconstruct the postcolonial legacy of the Indo-Persian region. In 2001, Sikander began to employ digital animation to create video works based on her drawings. Her practice traverses painting, drawing, animation, installation, and video, to radically rearticulate the tradition of miniature painting. Sikhander uses the technique to address contemporary issues, including the Western fear of Islam, the globalization of Western ways of living, and gender identity, focusing specifically on Muslim women in the West. The artist’s use of a traditional and scholarly approach to discuss the conflicts in the global condition creates a unique oeuvre--the digital animations, breathing new life into Mughal-era miniature painting.
Biography
Shahzia Sikander
Born 1969, Pakistan
Details
203.20 x 132.00 cm
Ink, gouache on hand-prepared paper
Related