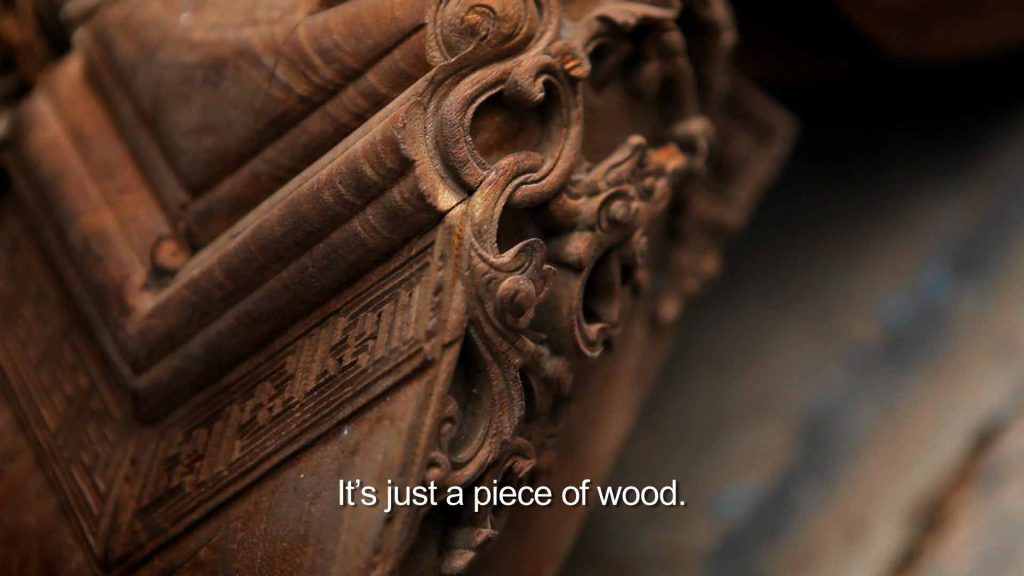 Fade In (the whole title of the film is actually the entire five page script) is a collaboration with the Danish artist collective Superflex (group of freelance artist–designer–activists committed to social and economic change, founded in 1993 by Jakob Fenger, Rasmus Nielsen and Bjørnstjerne Christiansen).

There are several time layers to understand the story behind this film. In 1601, the San Jago set sail from Goa for Lisbon; the cargo included the first consignment of South East Asian porcelain destined for the European market. During the journey, the cargo was stolen by Dutch pirates and sold on auction in Holland, which generated huge profit boosting the country?s economy. Objects from the San Jago are part of the collection of a historical museum in Holland (the Zeeuws Museum).

In residency at the Zeeuws Museum, Superflex commissioned The Propeller Group to produce a three-part TV-series called “Porcelain” based on this historic event, which was filmed in Vietnam and broadcast on Vietnamese television in March 2010. Authentic objects from the collection were used in the series, as well as fake ?toy replica? wooden guns produced in Vietnam.

The Propeller Group was established in 2006 as a cross-disciplinary structure. Its members, Phunam, Matt Lucero, and Tuan Andrew Nguyen have initiated a multi-platform, based in Ho Chi Minh City, Vietnam and Los Angeles, California. The Propeller Group is able to produce large-scale works, which expose the strategies of the type of global agency their name suggests. Their use of mass media enables them to combine seemingly contradictory themes: advertising and politics, history and future, and public and private. The Propeller Group often pushes their work back into the public sphere, using commodities as a form of public art. As an integral part of their practice, the group has cultivated the guise of an advertising agency—a public relations firm that confuses the brand and the message.
Biography
The Propeller Group and Superflex
Born 2006
Details
5 min 35
Video
Related
Things Entangling, International
Tokyo: Things Entangling, International
Cleveland, United States: Double Takes, International