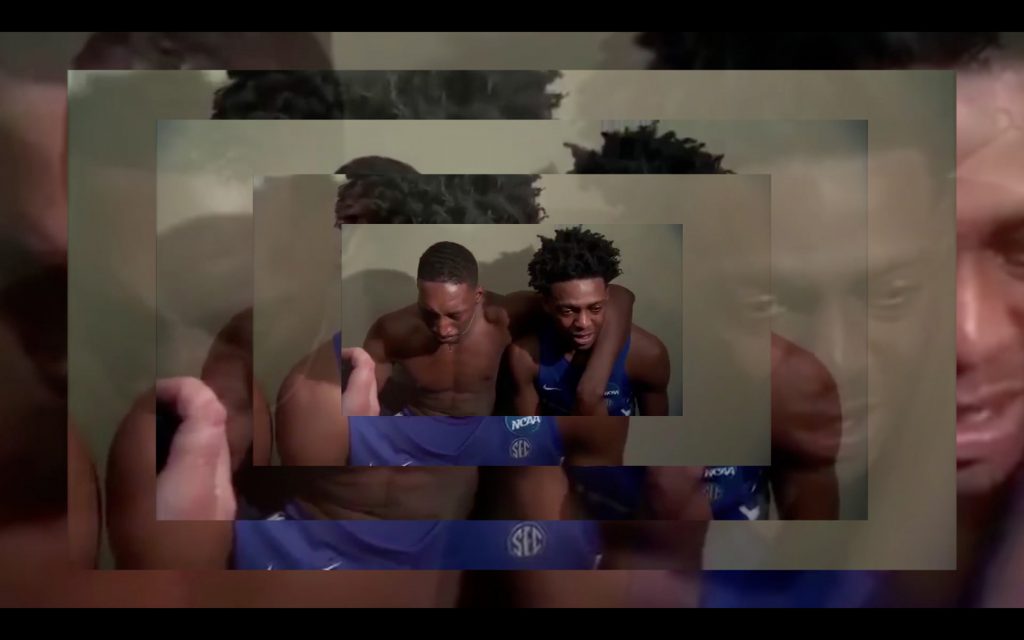 Jibade-Khalil Huffman’s work brings together spoken and written language, photography, vintage television and computer animation to pay homage to African-American popular culture. Figuration (B) is a mediatic dumpster dive through the not-yet-historical past, its fantasia of purloined images flowing to an interruptive, channel-surfing logic. A stream of TV clips, commercials, news segments, video memes, and movie scenes—at times run backwards, doubled, or layered over other clips—incorporate archival and pop cultural sources layered with a soundtrack constructed of found and made sources to make something akin to a video mixtape. With it, the artist (who has also published three collections of poetry) aims to flatten hierarchies of form as well as those that emerge among his far-flung source materials, by turns pop, esoteric, and vernacular.

Figuration (B) opens with the throbbing baseline from the title track of the 1980 cult film Flash Gordon, composed, produced, and performed by Queen; a Colt 45 advertisement; Scarface; Will Farrell tranquilized in Old School; the basketball player Isiah Thomas strangling his coach in 1989; Jeru the Damaja’s song Invasion and Dolly Parton’s 9 to 5; and a program in which a boy exclaims “Hey, aren’t you Frederick Douglass?” All of this is distorted or filtered through hazy pinks and greens, and it dissolves, on occasion, into graphic geometry. For all the accessible humor, pop imagery, and antiracist politics of Huffman’s work, its poetic excess of aesthetic, cultural, and semantic input accumulates into an opaque mass, overwhelming expedient readings.