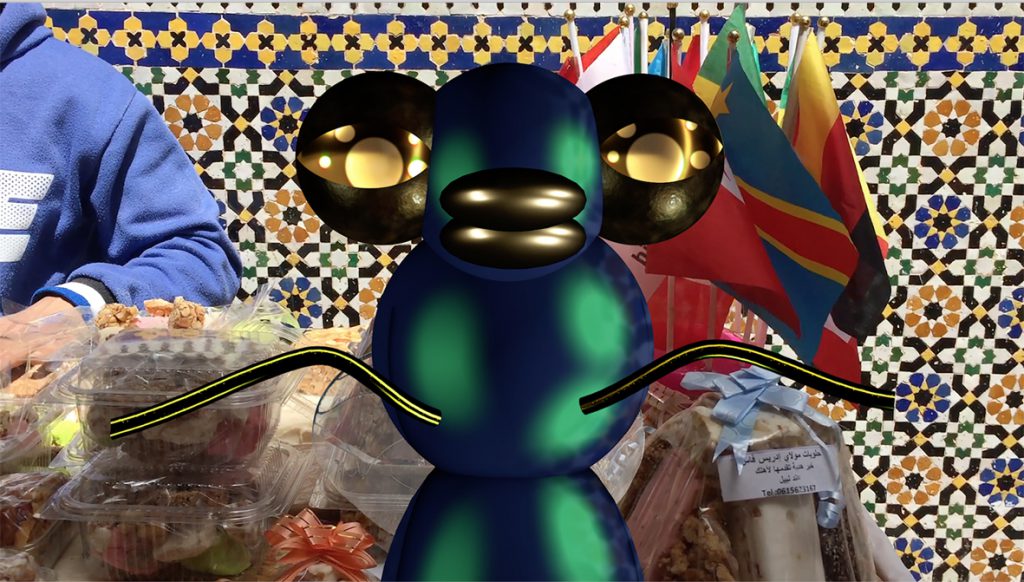 Fly was first commissioned as an immersive video experience for Meriem Bennani’s first solo exhibition at MoMA PS1 in 2016, imitating the mosaic structure of a fly’s eyes with a patchwork of projectors. As a single channel video, this work focuses more on the succession of sequences, shot in Bennani’s hometown of Rabat, showing interviews with relatives, an open-air market or a wedding, and jamming them with surreal digital manipulations. A recurrence throughout the film is a fly that accompanies us along the journey, as a childish motif or the symbol of a vanitas, able to sing Rihanna’s song. Bennani succeeds in emphasizing the contradictions and bizarreness of everyday life, often felt in situations of acculturation. In the scene featuring three wedding dancers — sheikhas — joyfully rolling on the floor, Bennani replaces the original traditional wedding music with Philipp Glass’ The Grid. Both cathartic and a way to create her own augmented universe, Meriem Bennani describes her work as a constant back and forth between documentation and magical realism.

The work of Meriem Bennani traverses video, sculpture, multimedia installation, drawing, and instagram. Developing films, installations and immersive environments to interlace references to globalized popular culture with the vernacular and traditional representation of Moroccan culture and history, the artist’s work is composed with humor. Bennani is interested in questioning fractured identities in contemporary society; identifying and upheaving gendered histories, through the filter of digital technologies. In 2015, she produced the first episode of Fardaous Funjab, a satire based on a reality TV show depicting a hijab designer (“funjabs”, fun hijabs) whose delirious and absurdist creations propose to Muslim women headscarves with lipstick pockets or tennis balls. Bennani ingeniously transforms an at-times controversial religious attribute into a pop-fashion accessory. In her work, she is particularly interested in exploring the relationships between women in Morocco through her female relatives. Through her sophisticated multi-layering of 3D animation, documentary film, music videos, and soap operas, her projects mimic contemporary American pop culture to contrast, merge and to manipulate Moroccan identity and culture.
Biography
Meriem Bennani
Born 1988, Morocco
Lives in New York
Details
17'33
Related
I Heard You Laughing : conversation et screening, Paris
I Heard You Laughing, San Francisco