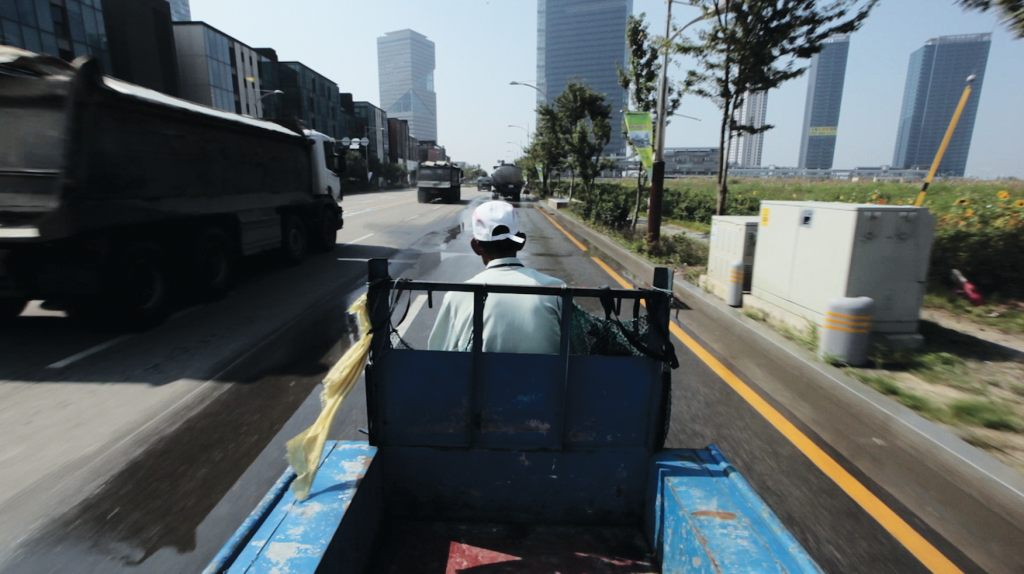 Fog and Smoke is the first video Jeamin Cha made after returning to Seoul from London where she studied and started as an investigation into the meaning of “otherness” in documentary filmmaking. The opening scene depicts an abandoned construction site that had once been part of the Songdo International Business District in Incheon, near Seoul. In the dark of the night, the sounds of a countdown and piano notes fill an empty apartment building and echoes far into the unknown corners and hollows of a newly built city. Delicate movements of the camera follow the last remaining fisherman in the old town as he drives toward the new town: once his waterfront workplace, the land is now filled in with soil and the debris of city development. Sequences of the fisherman’s journey into the cityscape are woven together with movements of the ghostly tap dancer continuing his frantic tapping in the empty streets at night. Nothing seems to ever happen as the camera follows patiently each individual as they retrace their daily routes and tell personal stories, representative of the artist’s methodology to let herself guided by encounters and unplanned conversations. The rapid socio-economic and political changes in the city appear slowed down, to the exception of the scene with the tap-dancer whose frantic tappings in the dark (as if possessed) become a metaphor for capitalism and echo the speed of gentrification driving these developments. If the video refers to the craze of urban construction in Korea and its halt due to the global financial crisis and economic recession after 2008, the depicted cityscape could belong to any location of hyper-capitalism in the world.

News articles or anecdotes from daily life often trigger Jeamin Cha’s videos. Her unplanned encounters, discoveries, and daily exchanges with people she meets in the streets guide the production of her videos, often through processes of interviews and field studies. Yet, rather than using didactic forms of documentation, she reconstructs images and narratives while looking for ways to connect her position as an individual with the layers of social fabric. The artist’s works question the premises of political action and addressing anxieties or ambiguities hidden within the seemingly ordinary everyday life. As such, intervention has become for her a sensitive form of expression that incites processes of questioning and investigation into the ever-present contradictions of the contemporary society.
Biography
Jeamin Cha
Born 1986, South Korea
Lives in Seoul
Details
20:40 minutes
HD video, color, sound
Related
Chengdu, China: A4 x KADIST Video Art Screening Series, International
Jeamin Cha, Troubleshooting Mind I, II, III, San Francisco
Jeamin Cha, (Home)sickness, International
Jeamin Cha, San Francisco