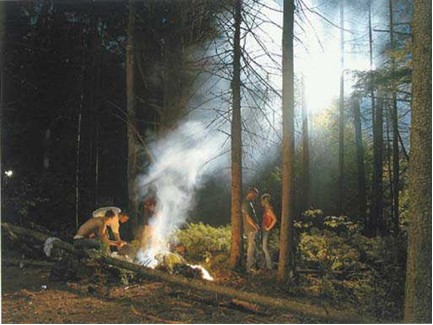 Forest Gathering N.2 is part of the series of photographs Beneath the Roses (2003-2005) where anonymous townscapes, forest clearings and broad, desolate streets are revealed as sites of mystery and wonder; similarly, ostensibly banal interiors become the staging grounds for strange human scenarios. These scenes are tangibly atmospheric, visually alluring and often deeply disquieting. Never anchored precisely in time or place, these and the other narratives of Beneath the Roses are rather located in the dystopic landscape of the anxious American imagination. Crewdson’s process and approach are patently cinematic. This series took shape over the course of three years in collaboration with a full production team.
His projects are made both on studio soundstages and on location in various small towns. After the photograph is taken, Crewdson continues his obsessive process in post-production, using state-of-the-art digital compositing and special effects. And in the end – like film at its best – Crewdson’s fictions, elaborately staged and plotted though they may be, convey an experience that is intensely real.

Gregory Crewdson works within a photographic tradition that combines the documentary style of William Eggleston and Walker Evans with the dream-like vision of filmmakers such as Stephen Spielberg and David Lynch. Crewdson’s method is equally filmic, building elaborate sets to take pictures of extraordinary detail and narrative portent. When he was ten, Crewdson’s father, a psychoanalyst, took him to see a Diane Arbus exhibition at MoMA, an early aesthetic experience that informed his decision to become a photographer. Crewdson’s everyday scenes with charged, surreal moods hint at the longings and malaise of suburban America. The artist uses "the limitations of a photograph in terms of narrative capacity to have an image that is frozen in time, where there's no before or after" and has turned that restriction into a unique strength.
Gregory Crewdson was born in New York in 1962. He lives and works in New York.