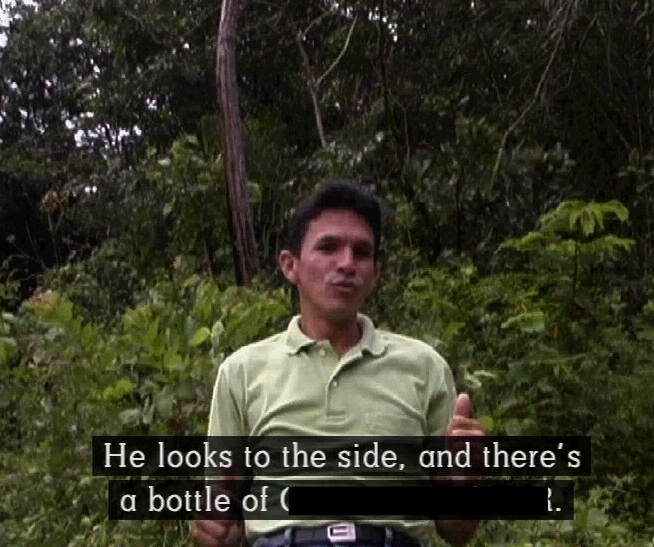 SUPERFLEX makes a distinction between two types of projects wit different temporalities: works that occur during an exhibition and other that evolved over several years. Thus, since 1997, they are working on a biogas system (SUPERGAS), first installed in Kenya, then Thailand and today in Mexico, perfecting at each stage the means of production, utilization and commercialization of this system. GUARANA POWER is one of these sustainable projects that create a real economy. The story begins in 2003 when SUPERFLEX was invited to Maués by a foundation and the government of the Brazilian state of Amazonas; this led to a collaboration with a cooperative of Guarana farmers. Maués is famous for its Opera shown in the film Fitzcarraldo but also as an industrial area situated in a free zone and housing multinationals such as Toshiba, Samsung or Benetton. During a first workshop with the Guarana farmers, they started discussing how to find common solutions to cultivate and commercialize Guarana without bending to the demands of the multinationals (like Antartica) who exploit the fruit and constantly reduce production costs and therefore labour costs. Thus the farmers’ experience and the concepts introduced by SUPERFLEX lead to the set up of efficient strategies of communication which are regularly perfected to sell the Guarana Power bottles internationally. Right from the beginning of the project, Superflex decided to self-censure itself by using a barred logo following threat by the main multinational. The artwork was also censured by the director of the Sao Paulo Biennale in 2006, which provoked important reporting in the press at the time. More generally, this project poses the question of the role of art and its limitations with regards producing effective consequences in response to a socio-political situation.

SUPERFLEX work on a number of projects linked to their avowed interest in political and social engagement on a local scale. They don't place themselves in opposition, but they unpick the political, economic and communication strategies that have been put in place in a context in order to make them more visible. SUPERFLEX intervene in places where it appears necessary to implement a “counter-economic” solution by experimenting with means of alternative production. They conceive their project in response to a context, whether it is that of an artistic institution or a social situation and create works that often establish a link between these two realities.
The Danish collective was founded in 1993 by Bjørnstjerne Reuter Christiansen (1969), Jakob Fenger (1968) and Rasmus Nielsen (1969).