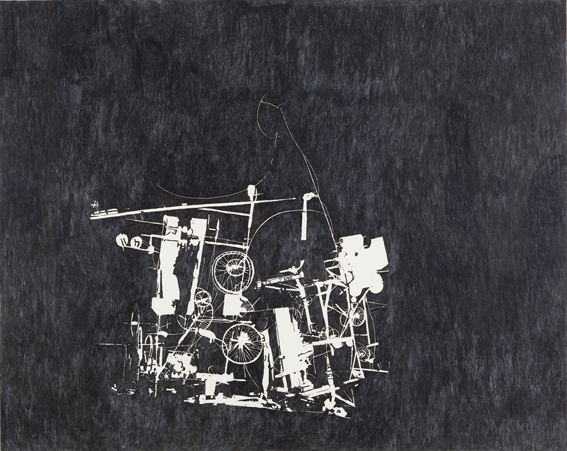 H.2.N.Y Skeleton of the Dump revolves entirely around the performance “Homage to New York” (1960),  of the Swiss artist Jean Tinguely (1925-1991),  during which the machine built by the artist in the gardens of the Museum of Modern Art (MOMA) had to self-destruct itself in 27 minutes, but, in the end, it had to be finished off by firemenbeing called in after it erupted in flames. Since the discovery of Jean tinguely’s retrospective at the Tate Gallery in London, in 1982, Michael Landy spent two years researching and sketching (charcoal, oil, glue, ink) from his previous research carried out  at Museum Tinguely in Basel, and at the MOMA in New York. By labor intensive work,  Michael Landy tried to recapture the essence of the event, to dislocate and to revive it with these the black and white drawings. He made them on several scales, some very small, some medium format and some, like this, large scale. Made with oil stick or white glue or both, he played on the idea of mezzotint as well as the idea of night time performance. The images are based on the film made of Tinguely’s action. Some drawings are made as though within the machine, and others, like this one, are made as though observing the machine from a distance. In certain drawings the machine is self-destructing, in others it is complete. Skeleton of the Dump shows the machine in lonely isolation, almost an outsider and rather forlorn. The motif itself is simply the white paper showing through.

One of the leading artists of his generation, Michael Landy’s work has posed serious questions about globalisation, recycling, regeneration and politics. Not afraid to embrace the traditional skills of drawing, he has also made large scale installations using multimedia. He is most famous for his installation, Break Down (2001) in which he systematically catalogued then destroyed all of his possessions in a disused department store. With sharp and wry observations on every-day life, Landy constantly seeks to question the relationship between art, institutions and markets.

Michael Landy was born in London, UK, in 1963. He lives and works in London.