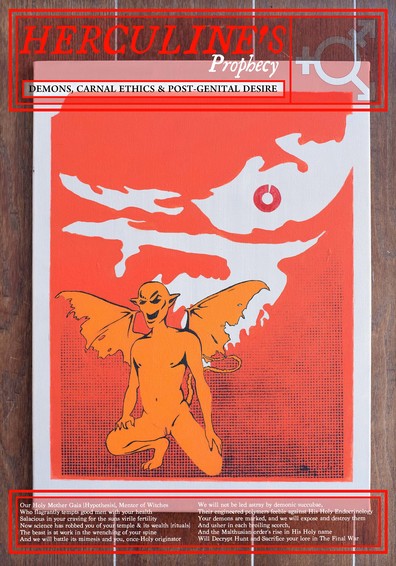 Herculine’s Prophecy features a kneeling demon-figure on what appears to be a screen-print, placed on a wooden table, which has then been photographed and digitally altered to appear like a book cover, with a title and subtitle across the top, and a poem written across the bottom. This composition is stuck to a metal plate by a series of button magnets, with interjecting phrases on them. The juxtaposition between the mysogynistic, almost puritan poetry that stripes across the bottom and the powerful crouching pose that the femme demon assumes inverts the hegemonic text , instead creating a space of alterity. The semi-deconstructed book-cover, denotes the seepage of this potential ontological reality (contained within this unwritten book) into the world, allowing Juliana Huxtable’s creation an added layer of possibility.

Writer, artist, performer, and DJ Juliana Huxtable explores intersectional identity through her multidisciplinary practice, which   seamlessly  blurs the lines  that typically separate methods of artistic production. Her work draws from her life experiences, as well as marginalized internet communities, oftentimes featuring hybrid humanoid forms that deeply probe representation of selfhood. In their self-consciously constructed visual ontologies, Huxtable develops a double edged practice that is, on the one hand, a critique of systemic sexist and misogynist power structures, body disassociation and dysmorphia, and on the other, a world-making that frames the radical potential of new technology. Avoiding concrete conclusions, these potentialities become propositions and provocations with which the audience must grapple.
Biography
Juliana Huxtable
Born 1981, USA
Lives in New York City
Details
243.84 x 121.92 cm.
Inkjet print, vinyl, magnets on metal sheet
Related