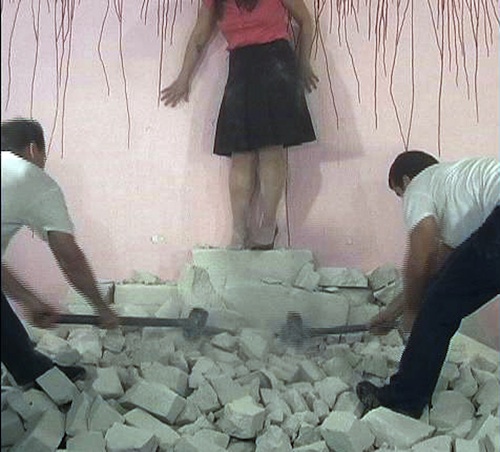 In the six-minute single-channel video Higher Horse, Kate Gilmore perches herself on top of a tall pile of plaster blocks, in front of a pink colored wall with vein-like streaks of red. Two muscular men with sledgehammers simultaneously pummel the blocks where Gilmore attempts to stand. Although we can only see the artist from the waist down, her body language reveals apprehension: her hands, tense, press against the wall in an attempt to maintain balance while the men come dangerously close to smashing her bare legs. Gilmore’s attire—red heels, a black skirt, and a pink top—together with the pink walls, are all symbolically charged as expressions of the female gender. The aggressive actions we see in Higher Horse are consistent with her investigation into the language of damage, destruction and rage, which in this case, is inflicted by the male body as she attempts to remain above, unharmed.

Whether through live or filmed performances, or sculptural works where we can see traces of  actions, Kate Gilmore’s practice always departs from the female body. Through her own physicality, and often using the language of destruction and rage, she creates works that bring into question social constructs relating to sex, gender, and most specifically, femininity. Although early in her career she often placed herself as the central protagonist, over the past few years she has invited other women to perform her pieces, and in some instances has even relied on audiences to activate works. A common feature of her work is the use feminine signifers—high heels, skirts, floral patterns, and specific color hues—which are set in stark contrast with physically demanding actions that are aggressive in nature and would commonly be associated with a masculine ethos. By tearing dry walls with sledge hammers, bashing cubes of metal and plaster, smashing glass containers full of paint—Gilmore’s gestures embody a form of resistance seeking to break free from the norms that constrict femininity, all of this articulated through and from the female body.
Biography
Kate Gilmore
Born 1975, USA
Details
6:13 minutes
Single-channel video, color, sound
KADIST VIDEO LIBRARY
Login to watch video
Related