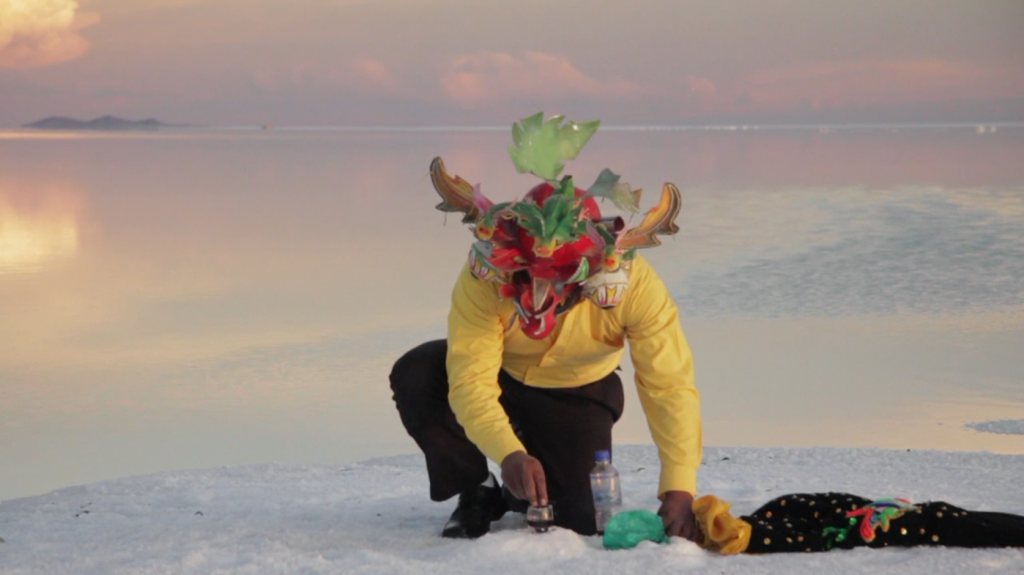 In Un Hombre que Camina (A Man Walking) (2011-2014), the sense of rhythm and timing is overpowered by the colossal sense of timelessness of this peculiar place. Shot in Uyuni, Bolivia, the film depcits world’s largest salt flat, a site that sits in a mountainous region at over twelve thousand feet above sea level. Ramirez’s work is deeply invested in the loss of regional identity, and the anachronistic dress of his “modern-day shaman” in the film is meant to reconcile the historical and cultural gaps between tribal traditions of a specific time and place and the all-too-prevalent homogeneity brought on by advanced capitalism. His festive yet ominous ceremonial mask, by extension, functions as a relic of colonial resistance: made by native coal miners to ward off Spanish invaders, the mask signals a need both past and present to preserve rituals passed down through future generations and across cultural genealogies.

Enrique Ramirez produces media and photography-based work that explores the interrelationship between landscape and “subjective imaginary.” Born in Santiago, Chile, during dictator Augusto Pinochet’s violent rule, Ramirez’s highly politicized practice questions notions of exile, displacement, loss of memory and a changing sense of place. Growing up with a sail-maker father, his process often returns to the sea as a backdrop for his investigations of geo-politics. Open spaces and vast landscapes prevalent in his seductive films and installations serve as breathing room for contemplation and imagination. A sense of longing and nostalgia often haunts his works as Ramirez engages both personal recollections and gathered stories of loss and deracination. He has exhibited his work at international venues such as the Palais de Tokyo, Paris; Loop Fair, Spain; and Museo Amparo, Mexico. He received his BA in Film Studies from Instituto de Artes y Communicacion ARCOS, Chile and a Master in Contemporary Art from the Studio National des Arts Contemporains in France.
Biography
Enrique Ramirez
Born 1979, Chile
Related
Enrique Ramírez, San Francisco