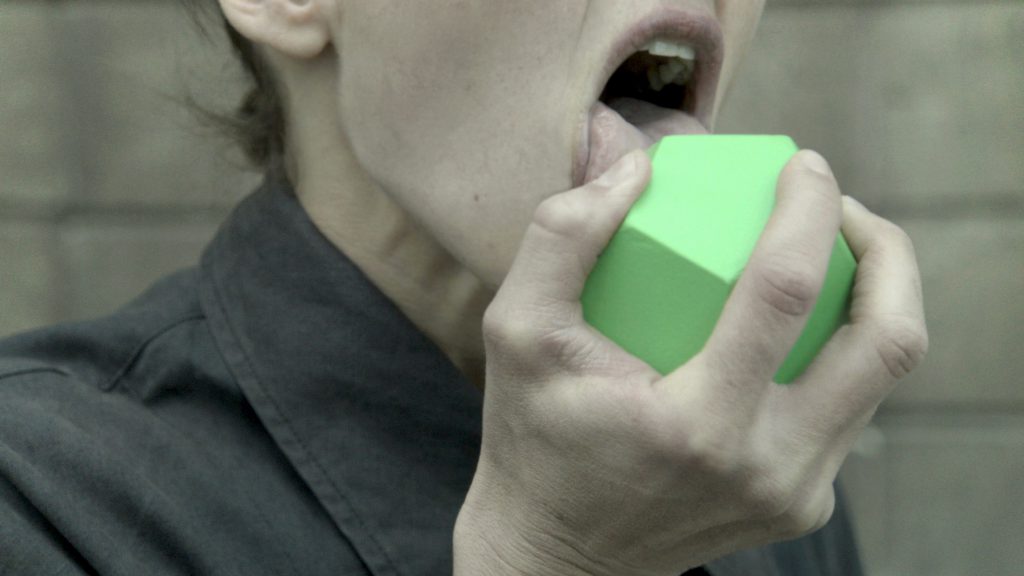 In the film Hustle in Hand (2014) we observe secret negotiations carried out between two characters with only their torsos visible in the frame— negotiations that consider fetishizations, meaning and symbolic value of the body and flesh. Money, food, appearances, and consumption: the viewer is pulled into a round of transactions, a rumination on our society in which art occupies a coveted position. The film’s rhythm is suddenly interrupted by the appearance of a green polyhedron that, once licked by one of the mysterious protagonists, becomes golden yellow, a magical event accompanied by an intense swelling of violin music. As is often the case in Shahryar Neshat’s videos, the music, soundtrack and speech use surprise as a significant element in the video. Presented in a glass museum display case near a Warhol camouflage painting, the object begins to speak in a voice-over, demanding to be the exclusive center of attention and manifesting its satisfaction by a forced laugh. Another scene in the film shows a man displaying a scratch on his arm. The wound, the vulnerable body and testing desire with disgust are recurrent themes in Shahryar Nashat’s work. Hustle in Hand seems disrupted by subliminal images that disturb viewing and challenge our consented credulousness, our necessary candor while suggesting a parallel narrative to our subconscious. The installation space—with several glass and marble sculptures, presents a multitude of visions amid which the gaze shifts—giving our imagination over to these measured, odd and agitated ambivalences.

The work of Shahryar Nashat (b. 1975, Geneva, Switzerland) is made up of the interwoven fragments of baroque and renaissance sculptures, humour, sensuality and insolence. Practicing largely in installation format, which give prominence to video, include photography, sculpture and etchings, the artist creates new opportunities for critical reflection about the canon of artistic media. With an interest in art collections, libraries, artwork reproductions and archives, Nashat imagines new forms of display through artistic reuse. Combining synthetic forms mediated by organic and man-made representations, the artist’s oeuvre is an examination of the human-body’s interaction with material culture.