Hank Willis Thomas
I am the Greatest 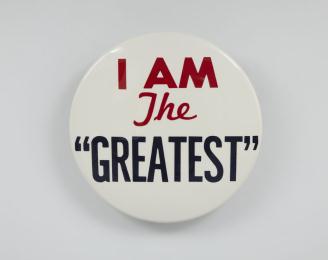 I am the Greatest

Like many of his other sculptural works, the source of I am the Greatest is actually a historical photograph of an identical button pin from the 1960s. I am the Greatest presents the famous quote by Mohammad Ali to think about his important presence in the African American community. In dialogue with the painting I am a Man, also in the Kadist collection, this assertion that begins the same way takes the line from the protest poster several steps further. Ali never asserted that he was the greatest boxer or athlete, but had the audacity to claim that he was THE GREATEST [human being] of all time. For a man who grew up in the segregated south to rise to Ali’s iconic status and to be able to confidently and proudly vocalize his superiority was one of the most powerful, symbolic, and memorable moments in the Civil Rights struggle. Monumentally inflating the scale of the button embodies the ‘larger than life’ presence of Ali as an icon for African Americans to stand up and not only assert their humanity, but to be confident in their ability to succeed and rise up against all obstacles society placed in front of them.

Employing the visual language and terminology of mass media, and appropriating symbols and images from popular culture, Hank Willis Thomas’ work seeks to question and subvert established definitions and positions with regards to personal identity and the narrative of race. Working across installation, photography, video, and media work, Thomas maintains his photo conceptualist roots, primarily taking source material from found photographs and archives. These images form the basis from which the artist seeks to uncover the fallacies that history claims as truth. His work illustrates how the way history is represented and consumed reinforces generalizations surrounding identity, gender, race and ethnicity, and that as an artist he has an opportunity to expose or to revise those histories from the points of view of the oppressed.
Biography
Hank Willis Thomas
Born 1976, USA
Details
33.5 inches in diameter
Related