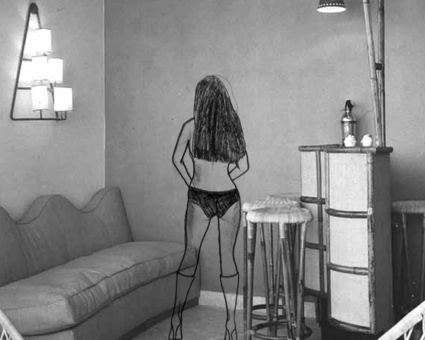 I’ve heard stories (2008) is one of Marwa Arsanios early works. It is a short animated film staging a story that took place at the Carlton hotel in Beirut. This work is the first part of a longer project on this iconic building.
In I’ve heard stories, Marwa Arsanios attempts to piece together rumors surrounding the now demolished Hotel Carlton. The hotel was a popular meeting place for gay men living in Beirut, Lebanon, where homosexual acts are considered illegal. At that time (1973 to 1993), the hotel was also the setting of three murders that might or might not have been related to these sexual encounters. Among the victim of these (probably) passionate crimes was the Lebanese politician and businessman Henri Pharaoun. Known as a collector and the richest man in Lebanon during most of his lifetime, Pharaoun was stabbed multiple times by an unknown assailant (his lover, driver or cook). Nora was the only witness to this murder. The nature of the murders went unreported. The animation explores different ways of narrating Arsanios’ reconstruction of the event through drawings and videos, gossip and facts, in an effort to give these crimes their place in the history of the city.

Marwa Arsanios is born in 1978 in Washington, United-States.
Lives and works in Beyrouth, Lebanon.

Marwa Arsanios is based in Beirut, Lebanon. She has just exhibited  (precise time reference) in Sweden (with Maria Lind/Tensta Konsthall) and will take part in the next Sharjah Biennale (2015). In 2013, her work was included in the Future Generation Art Prize event at the 55th Venice Biennale, and received a special award from the Pinchuk Art Foundation. Her work was also included in the Munster Kunstverein, Germany. ‘Jerusalem Show’, East Jerusalem; ‘Subversion’, Cornerhouse, Manchester, UK; and ‘In Other’s Words’, NGBK, Berlin, Germany.