Tony Labat
I Want You 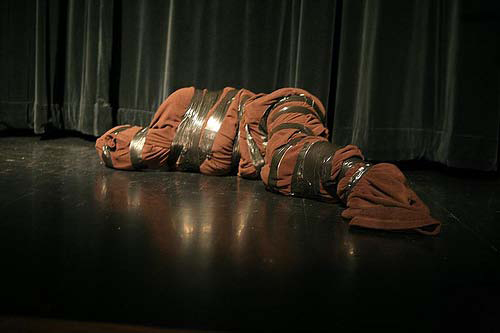 Commissioned by the San Francisco Museum of Modern Art and riffing on the “I Want You” army recruitment campaigns of the 1930s and 1940s, Labat asked Bay Area residents to interpret the slogan and make their own demands of the public in a series of live performance auditions. Given one minute to seize the voice of authority, contestants were asked to be the finger-pointing Uncle Sam, and their performances—as on the TV program American Idol—were voted on by a live audience. Five winners were chosen and their image and slogans appeared on posters throughout San Francisco to coincide with the presidential elections. A video of all auditions premiered at SFMOMA on election night.

Since the early 1980s, Cuban-born Tony Labat has been an important participant in the California performance and video scene. A pioneer in video installation, his work often identifies with the “outsider,” whether the artist or the immigrant and comments on displacement and marginalization. Labat has exhibited internationally in venues including the Museum of Contemporary Art, Los Angeles; Laguna Art Museum; the Museum of Modern Art, New York; the San Francisco Museum of Modern Art; the Palais des Beaux-Arts, Brussels; the National Gallery of Poland; the Helsinki Museum of Art; the Tel Aviv Museum of Art; and the National Gallery of Greece, Athens.
Biography
Tony Labat
Born 1951, Cuba
Lives in San Francisco
KADIST VIDEO LIBRARY
Login to watch video
Related