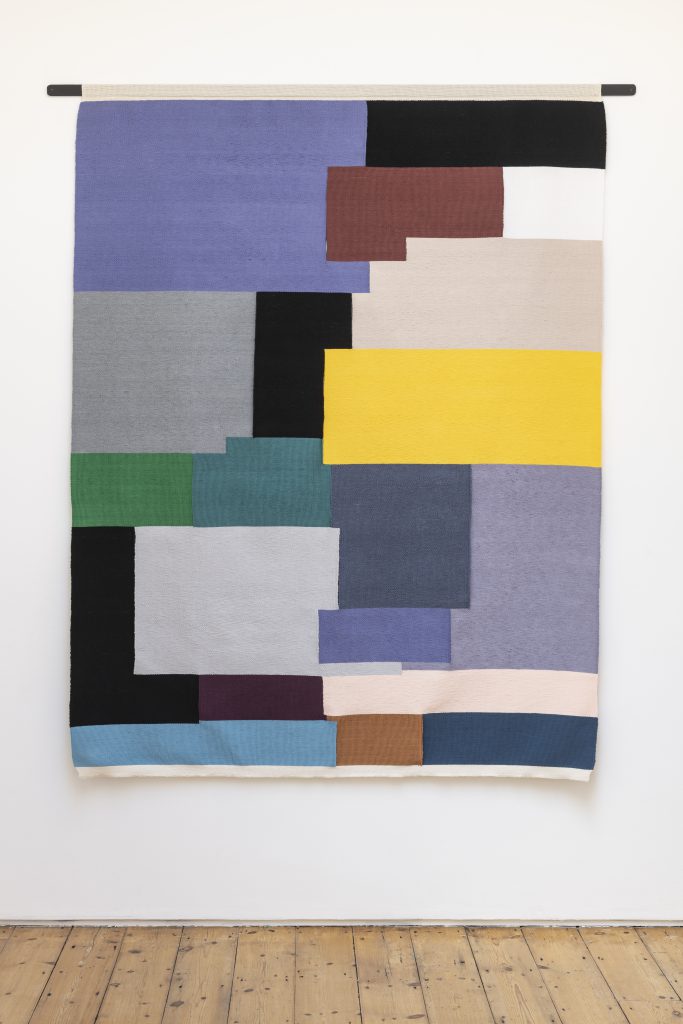 Incompatibles (Unitas) is made from discarded samples of the yarns that are exported from Croatia and not actually available in the local market. The textile industry in former Yugoslavia has essentially closed down under pressure from Indian and Chinese industries and as a result of the botched privatization of once state-owned factories. There is only one factory remaining in Zagreb producing these yarns. Certain colors are only available on the export market and it is these that Hana Miletic uses here, a political gesture pointing out the inequity of the system. These relics of a bygone industry represent both memory and the loss of work under a new political system, one which impacted older women workers most heavily.

Miletic’s interest in weaving has matured into a highly politicized activity as well as a one that implicates body and mind. The artist sees weaving as a labor which moves from head to hand and back again.

The design of Incompatibles (Unitas) resembles the utopian abstract works of the 1930s although they were not in her mind as she made it. Rather the process was to use the yarns in the order in which they came out of the bag and to make each rectangle as large as the amount of the yarn permitted. Thus the design is really quite random but determined by a systematic process. Miletic also recognizes their resemblance to Bauhaus type images.

Hana Miletic is a Croatian artist living in Brussels with a background in documentary and street photography. She uses photography as the basis for woven works, the fabric is an abstraction of what she has witnessed, a bringing of the outside inside, and serves as a kind of act of care and repair. Born in Zagreb in 1982 Miletic’s family were refugees from the former Yugoslavia. Her work resonates with memories of Croatia as well as dealing with the history of its culture. Her weaving practice began in 2015, she was both drawn to the precedence taken by material gestures over conceptual thinking and the intergenerational contact she had with women of different ages and cultural backgrounds. While primarily a craft and an artistic practice, weaving also has a social dimension, conceptually it allowed her to consider the metaphorical implications of binding together and repairing, both physically and psychologically. Although historically weaving is a male and a female occupation it is commonly associated with women’s work. Her adoption of this process for making art thus brings to the fore a feminist agenda, using a process normally associated with applied art to make fine art.
Biography
Hana Miletic
Born 1982, Croatia
Lives in Brussels
Details
190 x 150 x 0.5 cm
Hand-woven textile (variegated cotton, mercerized cotton, silk and viscose)
Related