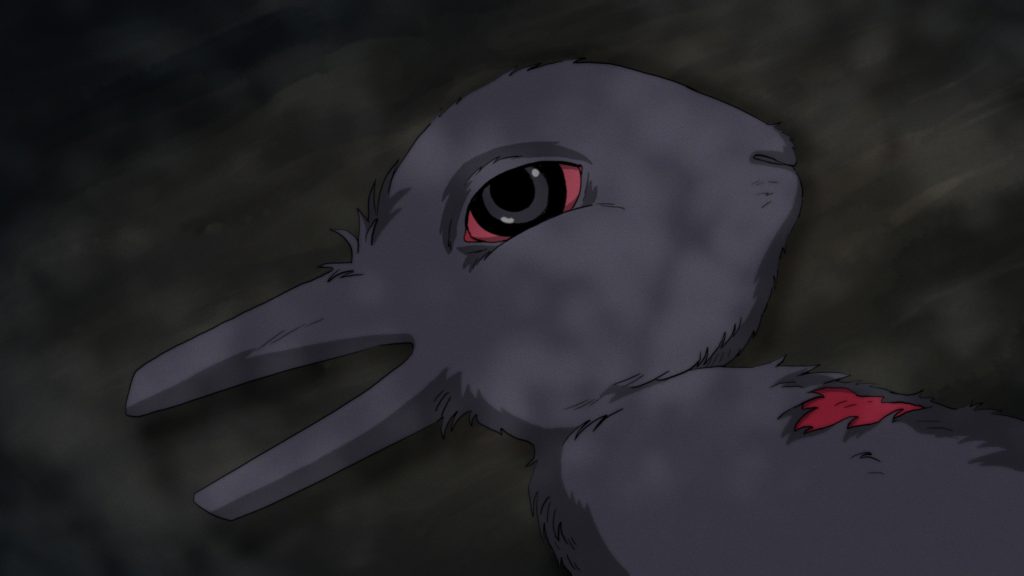 Miljohn Ruperto’s high-definition video Janus takes its name from the two-faced Roman god of duality and transitions, of beginnings and endings, gates and doorways.He is usually depicted with two faces as he looks both forward and backward, to the future and the past. The video, which is deftly animated in collaboration with Aimée de Jongh, presents a close-up of a dying “duck-rabbit,” a vivified version of an ambiguous illustration made popular by the Austrian-British philosopher Ludwig Wittgenstein in his Philosophical Investigations.  One’s attention shifts between seeing a duck and a rabbit, prompted by the animal’s movements and sounds. Its red eyes, wounded body, and belabored breathing suggest the end of life. Just as it appears to take its last breath, however, it inhales again, teetering on the precipice. As the video continues its unceasing loop, a resolution is withheld. In this way, Ruperto makes a connection between the ambiguity of visual perception and the paradox of life and death as embodied by this fragile animal in its final moments.

Based in Los Angeles, Miljohn Ruperto is a cross-disciplinary artist working across photography, cinema, performance, and digital animation. His work refers to historical and anecdotal occurrences, and speculates on the nature of assumed facts and the construction of truth. Often involving replicas, modified versions, and enactments—including Chinese-made reproductions of Caspar David Friedrich's ‘The Monk by the Sea;’ modified images based on the 15th century Voynich Manuscript; or reworked footage of Filipino actress Isabel Rosario Cooper—Ruperto takes cultural and historical references and untethers them from their original context to challenge our perception and generate something altogether new. Ruperto’s work is often informed by his collaborations with experts from other disciplines including Dutch animator Aimée de Jongh, neuroscientist and engineer Rajan Bhattacharyya, photographer Ulrik Heltoft among others. Through a richness and diversity of lenses, and preferencing the obscure, mysterious and the magical, his work challenges fixed conceptions of truth and history, and instead speaks of an indeterminacy and subjectivity of experience that renders truth and fiction near indistinguishable.
Biography
Miljohn Ruperto
Born 1971, Philippines
Lives in Los Angeles
Details
3:30 min.
Digital animation
Related
What We Know that We Don't Know, San Francisco
What We Know that We Don't Know, San Francisco