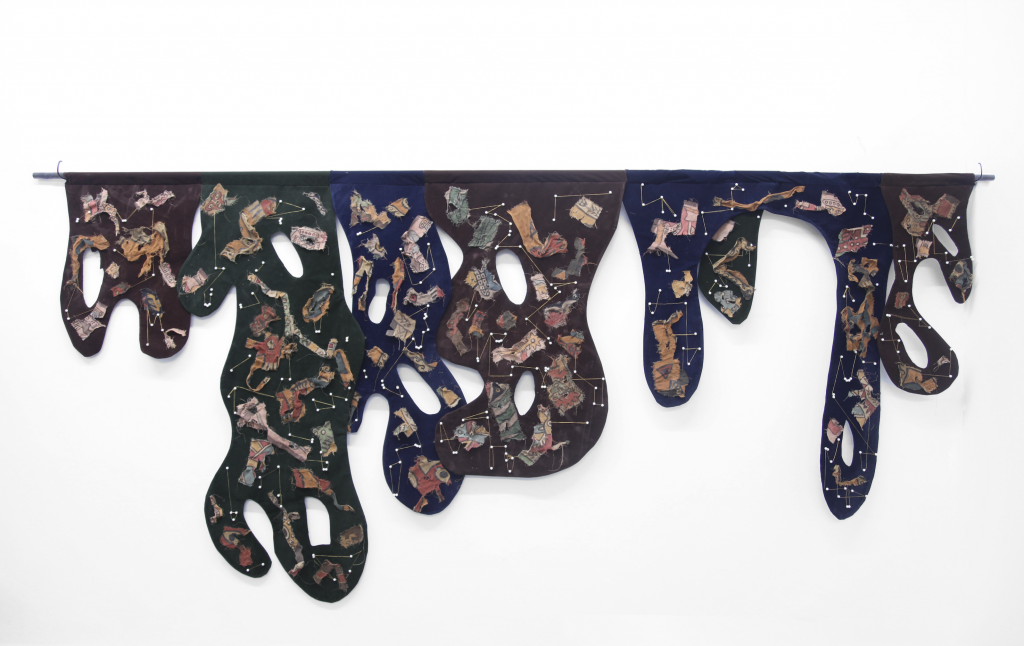 Juan III (Pescadores en una isla) is a series of embroideries made with fake pre-Columbian fabrics made by the Gonzales family, a three-generation family of pre-Columbian textile “forgers” based in Lima, Peru. The members of this family (grandfather, father, and son) all bear the name of Juan and makes replicas by hand using traditional methods nearly indistinguishable from the pieces made thousands of years ago.

A fake is something that purports to be what it is not, but the textiles made by the Gonzalez family openly intend to recreate those originally found at a necropolis in Peru in the 1920s. The necropolis held 420 bodies that had been mummified and wrapped in embroidered textiles in 200–300 BCE. These textiles were made by South American people over a thousand years before the rise of the Inca. They are brightly colored and show images of supernatural creatures or shamans who use their hands to hold severed human heads whilst their wings transport them like birds. But in the 1930s the Paracas Necropolis was massively looted and textiles began to appear on the international market within the decade. It is thought that the majority of the Paracas textiles in international collections were smuggled out of Peru during this time.

The fabric’s story offers a discussion on trafficking culture, the dearth of art historical scholarship on cultural materials, in particular the average knowledge of Andean culture before the Inca, and the questionable difference between fakes and forgeries from the real across the Americas. Tourists, collectors, and museums, wanted the ancient Americas, so locals made the ancient Americas, making fakes a feature of the pre-Columbian antiquities market since there’s been a pre-Columbian antiquities market. One could argue the textiles made by the Gonzales family is a contribution to preserve and revive the cultural heritage, long history, and soul of Paracas. These series of pieces serve as a tribute to them and this history.

Andrés Pereira Paz’s work regularly takes the form of textiles that explore the circulation of people and materials and how it affects national, regional and global imaginaries, revealing the construction of culture to be an ongoing and often contradictory process.  His work examines postcolonial issues from the perspective of the Andean region, particularly from his home country of Bolivia. The artist frequently references Andean art history, both from the pre-Columbian and colonial periods. He plays with this background and produces creative interpretations of contemporary Andean culture: the results are sometimes humorous, but always witty and incisive.
Biography
Andrés Pereira Paz
Born 1986, Bolivia
Lives in Berlin, Germany
Details
170 x 380 cm.
Embroided fake pre-columbian textiles and PVC pearls on cloth
Related