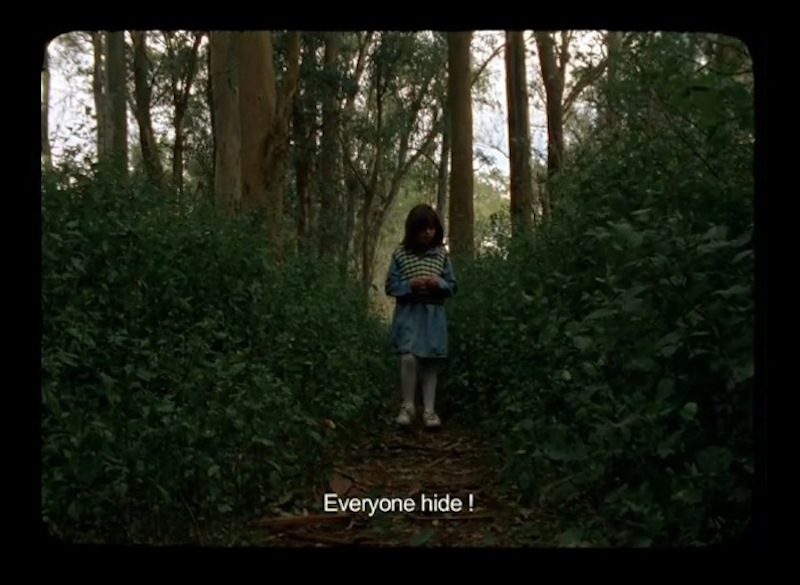 Shot on 35mm in two simply framed shots, Jazmín López’s Juego Vivo captures children at play, mixing imagination, reality, innocence, and violence. Set within a lush, green forest, we see first several children come into the frame, walking towards us, as a disembodied voice counts off “Tres…cuatro…cinco…” A game of hide and seek is at hand, and sounds of the girl counting are met with scattering children. In the first shot, while everyone else disperses, one boy advances steadily toward the camera, holding a scavenged stick in his hands, wielding it like a gun. He takes aim and makes a shooting noise; then, the camera reverses. The soundtrack repeats, as the girl, now in the frame, recites her counting. “Tres…cuatro…cinco…seis…” At the sound of the fake gunshot, a wound appears on the girl’s belly, and she falls, heavily, into the green growth of the forest.

Graduated from the Universidad del Cine in Buenos Aires, Jazmín López is a visual artist and filmmaker who has presented film projects in the 69 Venice Biennale, New Directors New Films at MoMA and Lincoln Center, Centre George Pompidou, KW institute Berlin among others.
Biography
Jazmín López
Born 1984
Related
Shanghai, China: On Struggling to Remain Present When You Want to Disappear, International