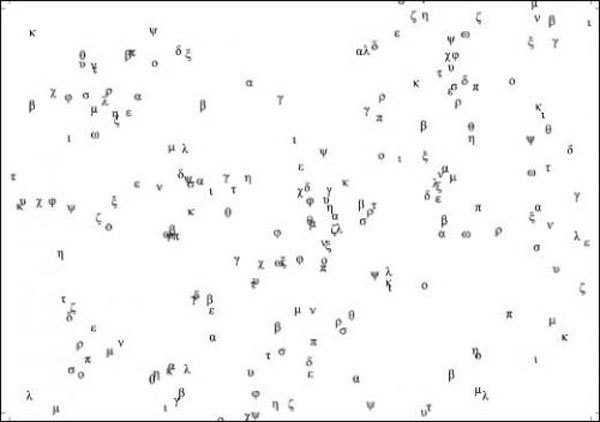 Letters of the Greek alphabet glisten on a black background. When a letter appears, there is a sound. Each letter corresponds to a star in the sky. Alphas, betas, gammas spread in space. The sound attributed to the first letters is high-pitched, then it gets lower for the rest of the letters in alphabetical order. The composition is organised according to the order of magnitude which attributes a letter to every star in the constellation. A cartographic order is established : sequences of alphas, gammas, betas come to pass simultaneously. The positioning of the letters corresponds to that of the stars in the Northern Sky map, their appearance is guided by the distance compared to the previous star. The distance on the map is used as a given time : the closer a star is to the next one in space, the closer it is in space.

Linguists, semiologists and graphic designers by training, Angela Detanico and Raphaël Lain consider the use of graphic signs in society. They are interested in the notion and notation of time and create new typographies by substituting letters from traditional alphabets with forms taken from the everyday. These forms are then displayed in the exhibition spaces which allows for a new materiality to be read. Detanico & Lain consider the role of language. Language reveals its double function, as a communication tool as well as an instrument for reading and a reflection on different cultures. Oscillating between rudimentary techniques and cutting edge technology, their works take such diverse forms as letters, words, still images, animation, sound and installation. Whether alphabets, cartographies or calendars, they address the actual foundations of these codes that govern our daily lives, certain of the operative links between signs and meaning. The artists invite the onlooker to a decrypting game that unlocks multiple levels of culture.
Biography
Angela Detanico & Rafael Lain
Born 1973, Brazil
Details
Animation film, black and white, sound, loop
Related