Shay Arick
LIFE #1, a reenactment of a Japanese officer who is about to behead an Australian flier. The Pacific, 1945 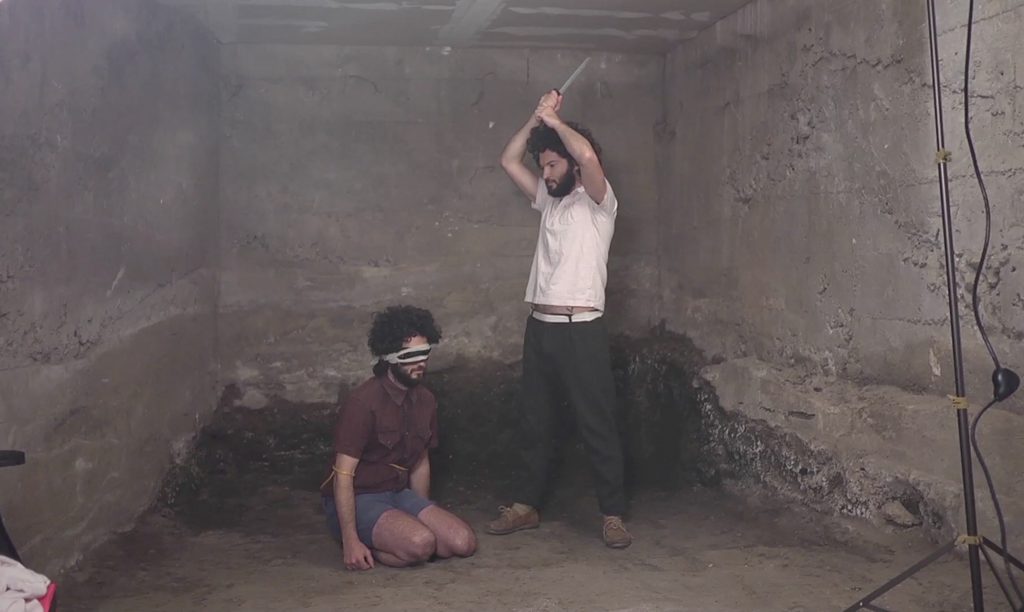 Shay Arik, LIFE #1, a reenactment of a Japanese officer who is about to behead an Australian flier. The Pacific, 1945, 2013 (still)

Part of a series of videos called LIFE, where Shay Arik videos that re-enact iconic journalistic photographs. As explained by the video’s title, the departure point for LIFE #1 is the iconic 1943 photograph published by Life magazine that captures Japanese officer Yasuno Chikao from the Imperial Japanese Navy as he raises his sword, seconds before publically beheading Australian war commando Leonard Siffleet in the shores of Papua New Guinea. In Arick’s restaging there are no onlookers in the scene, the only two figures represented are Chikao and Siffleet: the perpetrator and victim of this fatal act of violence. The two subjects in the video assume the poses akin to the original photograph and remain still for the whole duration of the work, their act of endurance interlacing testimony, history, and temporality.

Violence is key to Shay Arick’s practice who employs photography, sculpture, performance, video and drawing as means to understand what motivates people to enact it. Born in Israel, the now Brooklyn-based artist has experienced the lasting effects of growing up surrounded by decades of the Israeli-Palestinian conflict and hence strives to make work that fosters empathy and dialogue. Often taking cues from archives or historical sources, Arick restages or re-interprets iconic cultural imagery and historical moments to expose the absurdity in the constructs and taboos that can drive socio-political conflicts. Whether through composite photographs of hands throwing rocks during armed conflicts, a body of work concerned with violence perpetrated against animals, or a series exploring violence and masculinity through the biblical story of David and Goliath, his work invites us to reflect and contemplate, from the perspective of both victim and perpetrator, about a brutality that appears to be an inevitable condition of our humanity.
Details
5:06 minutes
Single-channel, color, sound
KADIST VIDEO LIBRARY
Login to watch video
Related