Mark Leckey
Made in Heaven 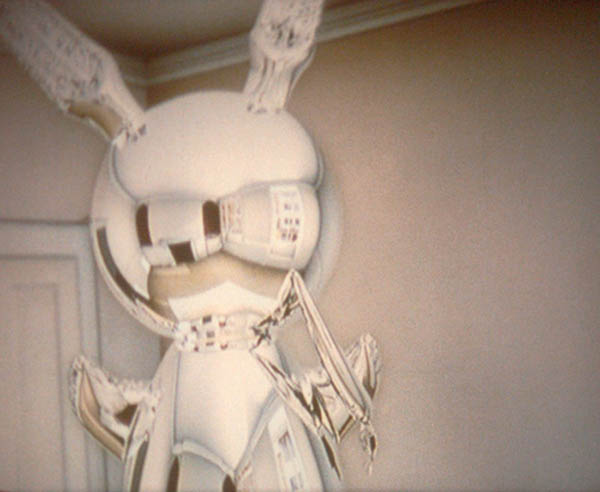 In Made In Heaven, we are face to face with a sculptural apparition, a divine visitation in the artist’s studio. It isn’t just any object, but an iconic sculpture of the end of the 20th century: Jeff Koons’ Bunny.
One key question in this work is of course the construction of images, but there is also the question of sculpture, of the passage from two-dimensionality to three-dimensionality. The reason for using the moving image, above all theoretical, is also part of interrogation regarding the material construction of images. For this film, he remakes Koons’s sculpture in order to be able to experiment himself in his studio. One can discern the contours of his studio and sometimes his presence in a lot of his videos. With reference to Marcel Duchamp, he wants to create the ultimate Machine Célibataire (Bachelor Machine), by producing nothing other than itself in reference to the self- reflexivity of Pop.
The Bunny is a sculptural form in space which also produces images. It is obvious that we are in an image which is entirely constructed since it is impossible to film the object without having, at a certain point, the reflection of the camera on the steel surface. Mark Leckey is interested in the possibilities of new technologies and places at the heart of his practice the revelation of a sensitive and quasi-magical world. The film loop (which only lasts 2mn) places the spectator in a completely hypnotic state.

Mark Leckey became know in the 1990s with a cult film Fiorucci Made Me Hardcore about English clubs since the early 1970s. Rather like Jeremy Deller, his work at the time was a mixture of Pop culture and counter-culture. In fact a constant in his work is an interest in the icons of our visual culture. In Felix Gets Broadcasted, he became interested in Felix The Cat who was first of all present at the beginning of the 20th century in over 250 newspapers and was the first character to benefit from TV transmission in 1928 in New York. This is the story of a cartoon hero and his successful conversion from cinema to the written press and then to TV, before being integrated into the art system. Mark Leckey is of the same generation as Damien Hirst but has had a very different career path. He was part of an alternative music band and is currently professor of the history of cinema in Frankfurt. He won the Turner Prize in 2008.

Mark Leckey was born in Birkenhead, UK . He lives and works in London.