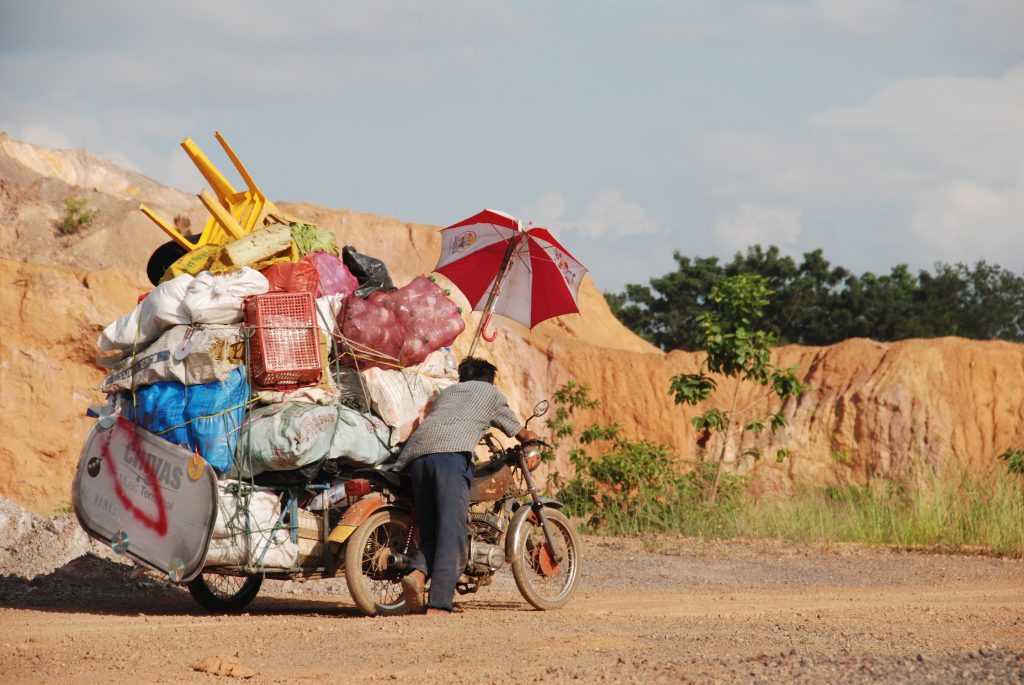 The film Man and Gravity follows the journey of a man in an old, beaten motorcycle, struggling to transport his possessions through a mountainous landscape. At times riding swiftly and at times caught in a bind, we witness the man fighting against gravity and the roughness and irregularity of the terrain. The film draws on the artist’s own Buddhist beliefs, referencing the writings of ascetic Thai philosopher Buddhadasa Bhikkhu, who uses the concept of gravity as a metaphor for karma and destiny. The man’s attempt to win over gravity, pushing and maneuvering in and out of ditches while holding the weight of his possessions, speaks of the invisible forces we must all work against, and symbolizes the struggle to fulfil his (and our own) destiny.

Jakrawal Nilthamrong is a Bangkok based artist and filmmaker who came to prominence for his unconventional approach to filmmaking. From short films and documentary to video installations and feature films, his works often incorporate concepts from Eastern philosophy, which acquire new meanings when revisited in a contemporary context. Influenced by surrealist figures such as Salvador Dalí and Luis Buñuel, Nilthamrong’s films are characterized by their enigmatic nature, lack of a linear narrative, and their use of the non-sequitur. Some of the recurring themes in his work include karma, reincarnation and destiny, drawing on his own beliefs as a practicing Buddhist in order to explore painful events in Thailand’s history and their resulting trauma. The results are perplexing and complex films that follow their own internal logic and defy easy interpretation, slipping between past and present, the real and the imagined.
Biography
Jakrawal Nilthamrong
Born 1977, Thailand
Details
10:39 minutes
HD Video, color, stereo
KADIST VIDEO LIBRARY
Login to watch video
Related