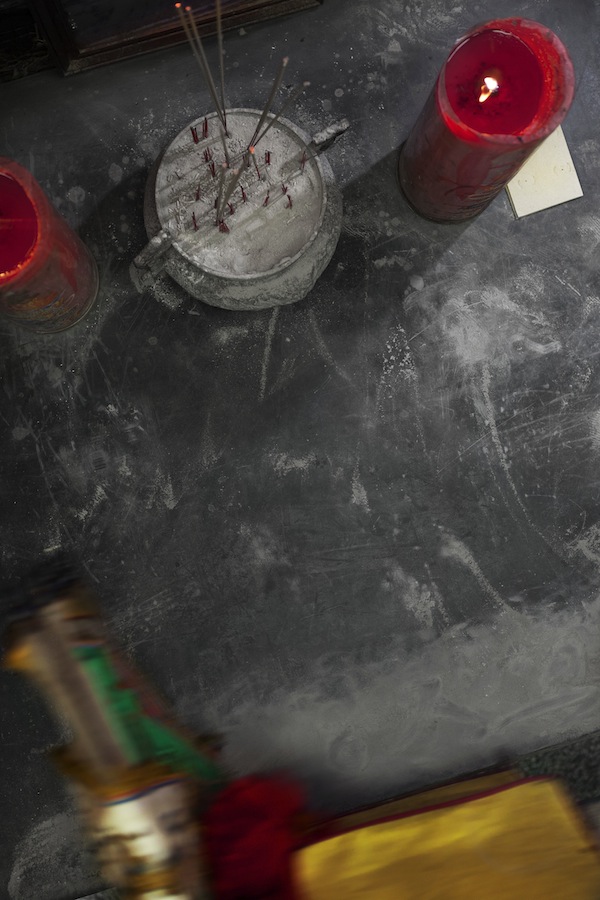 Marshal Tie Jia (Turtle Island) explores the history of a tiny island off of the coast of Matsu in the Taiwan Strait that has been instrumental in the geopolitical relationships between China, Taiwan, and Japan. The Chinese frog deity, Marshal Tie Jia, is now exiled to the island where he is still revered by the Taiwanese people. The installation includes documentation of the artist’s correspondence with the frog deity placed upon an altar, while the video explores both Marshal’s birthplace in China and his current home on Turtle Island. The video slowly zooms out from a fabricated version of Marshal’s former temple, which was dismantled then rebuilt on another island by dictator Chiang Kai-Shek when he retreated to Taiwan. As the video zooms out, it reveals the edges of the green screen, calling attention to the nation state’s production of the mythological narratives that play a persistent role in forming cultural identities. Image, text, and installation obscure the lines between truth and myth to establish a new mythology of representation.

Chia Wei Hsu makes site-specific video installations that explore memory and cultural identity by interfering with distinctions between reality and fiction and layering past and present. He incorporates the history, myths, and cultural memories located within each place he represents, visualizing the “stories inside history” and questioning the rationale of national identification. His recent work often focuses on forgotten Asian histories of the Second World War and the Cold War.
Biography
Chia Wei Hsu
Born 1983
Related
Singapore: Chia-Wei Hsu, commission for the Singapore Biennale 2019, International