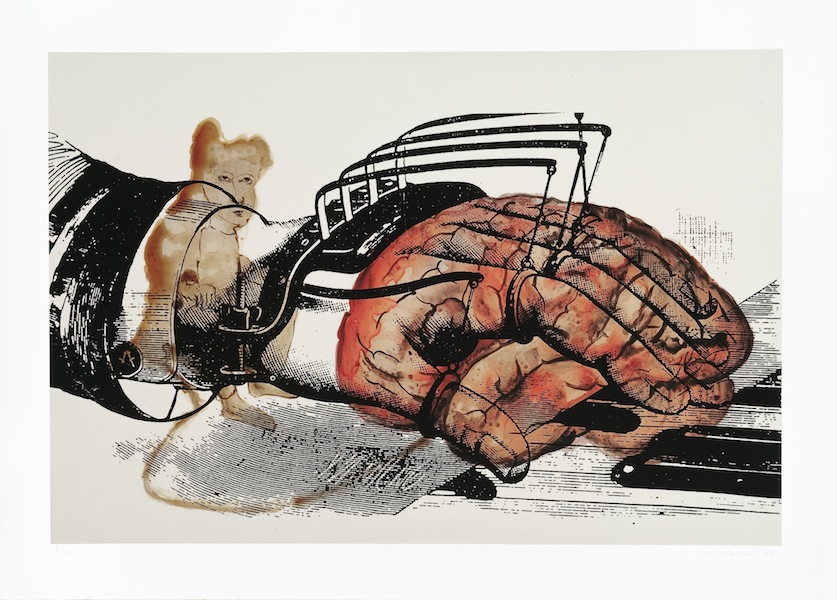 Memory: Record/Erase is a stop-motion animation by Nalini Malani based on ‘The Job,’ a short story by celebrated German poet and playwright Bertolt Brecht. Brecht’s story follows a poverty-stricken family during the German depression, as the central character, Frau Hausmann, is forced to impersonate her late husband to procure his job as a nightwatchman to support her two children. Despite her exceptional performance during the job, and even after receiving public commendation for catching a thief, when eventually her identity is discovered during a factory accident she is forced into a precarious existence where she resorts to selling herself to get by. Malini’s interpretation is comprised by drawings on parchment paper that suddenly appear, mutate, and subsequently vanish. Beyond referencing a glaring injustice and highlighting the arbitrary division of labour between genders, Malani poetically alludes to the fragile and ephemeral nature of our identities, our memory and more broadly our humanity. Like the marks on the paper, Malani meditates on the ease with which our lives can suddenly become undone.

Nalini Malani is a leading contemporary artist from India whose work looks critically at issues of gender, race, geopolitics, and the impact of consumer culture amidst rampant globalization. Working across painting, drawing, installation, animation, video and theater, Malani’s practice is characterized by its political bite, and, as described by the artist, for having an ‘internationalist’ perspective of global issues. Malani came to prominence in the 1980s through pioneering work that brought Feminist issues to the fore, courageously addressing the fatal place of women in Indian society. Highlight the violent legacy of colonialism has been a central concern, especially due to how she experienced it firsthand as a child and refugee during the partition of India. Formally, her work has borrowed imagery from Hindu as well as Greek mythology, and is characterized by a distinct combination of abstraction and figuration. From the 90s onwards her focus shifted towards theater and immersive installation pieces that incorporate video or hand-drawn animation while dealing with similar subject matter.
Biography
Nalini Malani
Born 1946, Pakistan
Details
10:27 minutes
Single channel, stop motion animation
KADIST VIDEO LIBRARY
Login to watch video
Related