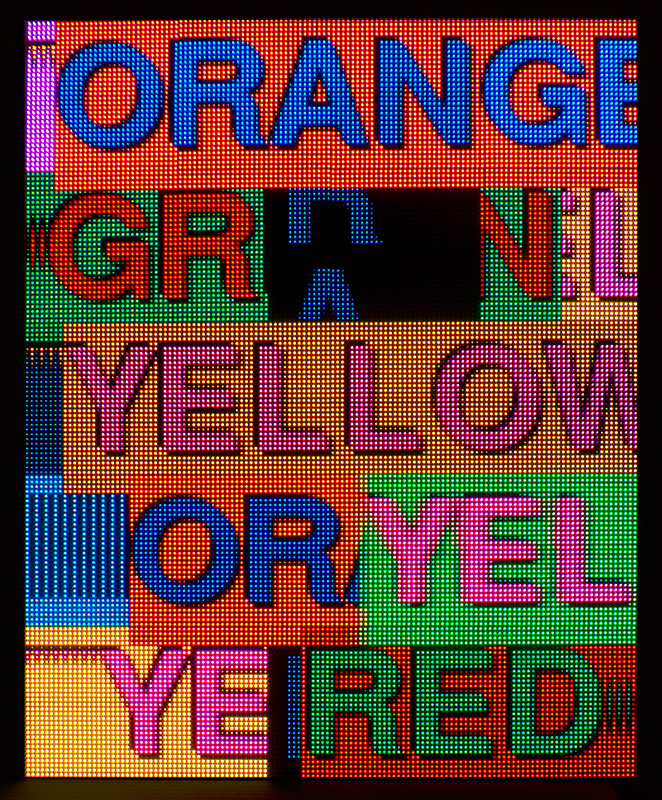 What Color is Luke Murphy’s outstanding digital painting that elegantly loops in nonstop motion. The artist cleverly usurped the familiar signage of brightly scrolling words that we ordinarily see calling out to advertise a Bodega or sidewalk cart’s fast food. In a DIY manner, Murphy constructed the extra-luminous LED panel screen and also wrote the code that sets the pace and pattern of the flowing words. Murphy plays with his viewers’ routine as “users” who spend countless waking hours on a daily basis staring at a computer screen. In the same way, he regards his viewers as “users” of his art. On the screen of the work, Murphy’s words animate one of the Internet’s oldest memes: in bold letters “ORANGE,” “YELLOW,” “GREEN,” and so on, glide across the display in colors different from those they signify.  Emoticons dance across the composition, as iconic as a Jasper Johns’ flag painting, but with the humor of a broken announcement board on the New York subway. Murphy resolves the tension between painting (as object) and computer screen (as medium), which has plagued digital artists for years.

Luke Murphy is a systems-based artist whose work is loosely bound by common themes of quantifying elements of the psyche and spirit with a particular interest in the Gnostic gospels, religious paintings, and digital languages – codes and systems to make art.  His work of the past few years has been an investigation into the fundamentals of randomness and how it powers digital art, the underlying mechanisms of hope and politics and more broadly our digital age. Seeking the most perfect source of randomness lead him in the past to use radioactive decay, as the engine to generate random numbers that are then harvested to power his art. The sublime unpredictability and profound unknowability of the spontaneous decay of Uranium is translated by his various algorithms into a new sublime, one of information, digital visualization and painting strategies.  Murphy's work tries to interleave cultural post-atomic anxieties, information culture and the Gnostics’ belief that the world was and is irrational.