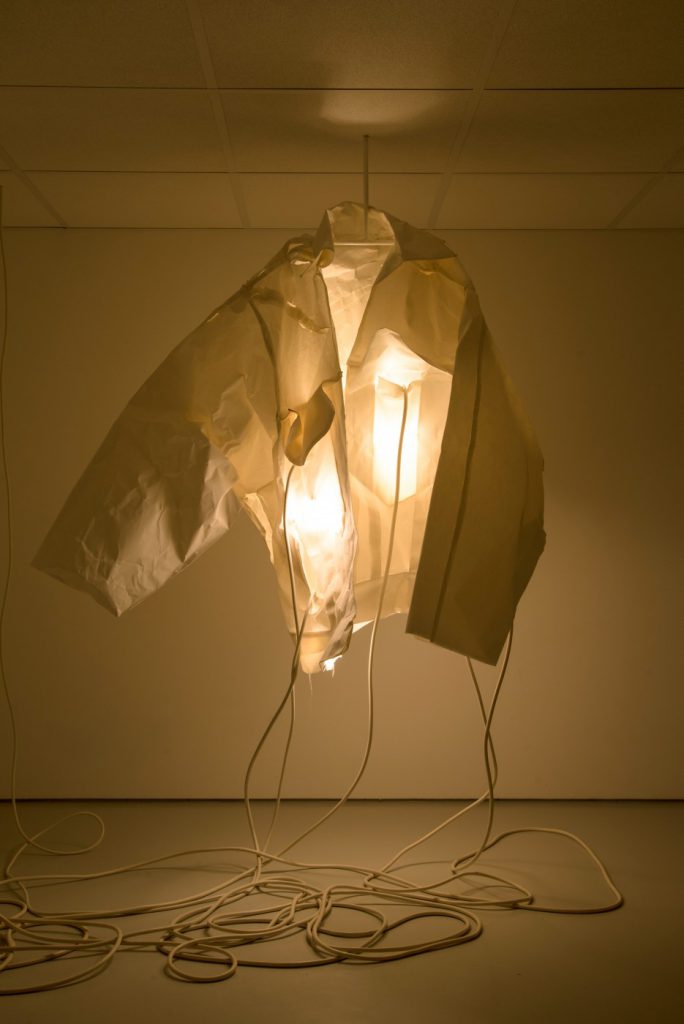 My Shape (2018) is the final work of the exhibition “Sorry”, taking the form of a Levi’s denim jacket pattern, expanded three or four times larger than its original shape. Adorned with different pockets, visible through the transparency of the paper and different light bulbs illuminating the form, white cables link the piece to hidden plug sockets, recalling a similar piece made by the artist for the 2015 Ricard Foundation prize. The work is representative of a series of recurrent concepts in the artist’s work manipulation of scale, abstraction through monumentalization, highlighting of tangential objects integrated like sculptural elements by the artist, in a way in which others might try and hide them, as well as the melding of the intimate alongside objects of mass production and the globalization of tastes.

The work of Mélanie Matranga requires a period of adaptation for the observer, not in terms of intellectual or theoretical cognizance — the forms, objects and situations are both quotidian and universal — but rather in terms of emotional and sentimental range. Run through with threads and fluxes of affects, the artist’s work constructs a distance that must be negotiated, one which electrifies the interstice between the private sphere and the public space, between intimacy and togetherness, introspection and the staging of the self. Matranga’s work has the capacity to reflect on the present state of sensation, and the perpetual adjustments taking place between the real and the virtual. She reveals the complexity of sentiment in an immediate and sensitive way. She creates spaces for thought, where bodies communicate with one another when words do not suffice.
Biography
Mélanie Matranga
Born 1985, France
Lives in Paris
Details
115 x 120 x 70 cm
Paper, lights, thread, steel, paint
Related