Pascual Sisto
No Not Nothing Never 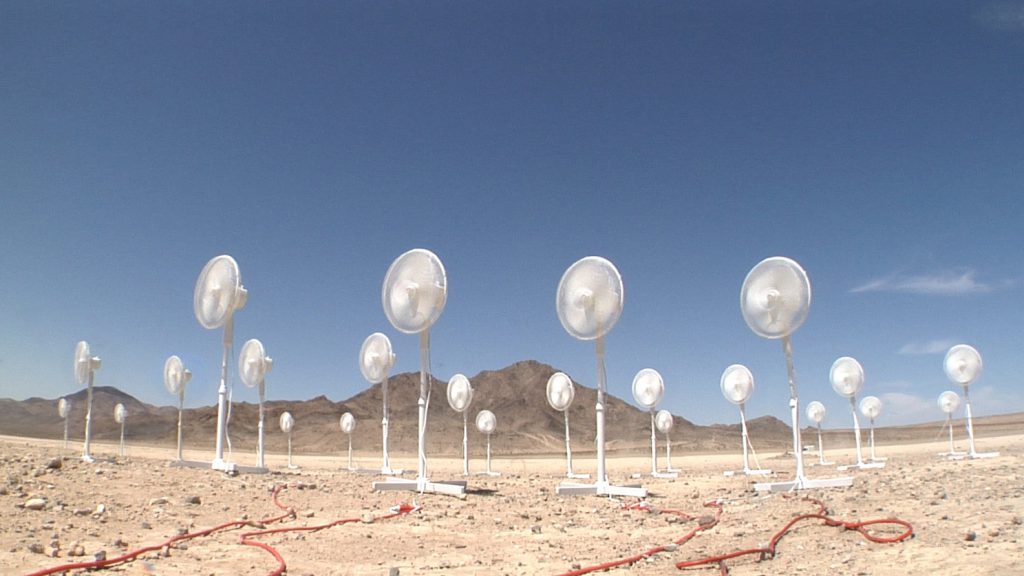 In the video No Not Nothing Never, a group of 23 domestic fans arranged in a mountainous desert landscape, move in perfect synchrony. Although when placed in this arid geography, the fans become evocative of wind turbines that generate electricity, the fans used by Pascual Sisto consume energy in a futile attempt to alleviate the dry heat. The familiar humming of the fans is eclipsed by the sounds of the strong desert winds that pass by as the fans turn. No Not Nothing Never reflects the artist’s fascination of the divide between natural and artificial, which is a key concern across his oeuvre. As per many of his works, Sisto here disrupts the mundane, removing a common household object from its usual context and purpose in order to create a space of inquiry.

Artist and filmmaker Pascual Sisto is known for creating works that reimagine the mundane as captivating alternate realities. Although he works across media (including video, film, sculpture and installation), most recently, Sisto has produced a series of films and video works that use visual effects, animation, and other forms of digital interventions as a means to explore the metaphysical dimension of the virtual world. Often by repurposing information gathered from multiple sources—such as footage from the internet, his own video archive, computer animation, and even data mined by algorithms—Sisto creates synthetic, new environments that exist in parallel to ‘real’ space, or what we understand as such. These alternate spaces allow him to explore the digital realm an expression of our consciousness as well as how we physically and emotionally relate to technology and forms of artificial intelligence. Although the subjects, objects and landscapes we see across his work are recognisable—like a group of domestic fans blowing wind into the desert, or digitally rendered objects like a can of paint, a watch, or a hand grenade floating in virtual space—Sisto strips them of their ordinary purpose, dislocating order and function to create what he describes as ‘moments of transition.’  From the physical to the abstracted, Sisto shows us liminal space, a sort of limbo between the real and the virtual; between presence and representation; between the imagined and the concrete.
Biography
Pascual Sisto
Born 1975, Spain
Details
8 minutes (looped)
Single-channel, color, sound
KADIST VIDEO LIBRARY
Login to watch video
Related