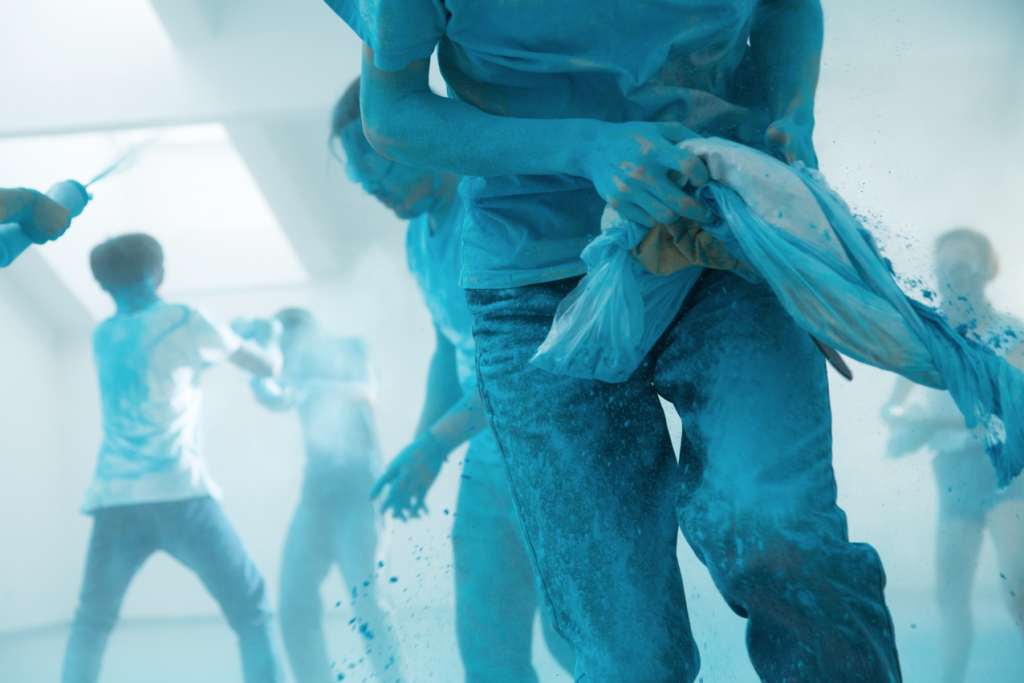 No World is an action-filled video work filmed inside an abandoned museum in the Songzhuang area outside Beijing. Without using any dialogue, Lu created an artificial scenario where she instructed actors with a list of tasks to gesturally mime scenes from news and journalistic images outside China. Through an intuitive self-trained mimicry, these acts simultaneously became moves in a game as well as a daily routine. No World points to the changing roles of the camera from a device originally invented to memorialize a moment to a tool that situationally creates an event. The performance of violence, conflicts and human relationships in the confined space blurs the boundary between the gallery and everyday life, between staged performance and documentary footage. The work is also a metaphor for a desire in today’s youth to go beyond their controlled, mediated environment and perform chaos in order to heighten their existential awareness.

Lu Fang grew up in a family of Chinese ink painters. Reacting to her upbringing upon exposure to video art, Lu decided to pursue art education in the United States in graphic design and new genres. Fang’s practice consists of video works that explore the way media and performance impact love and human relationships in desolate, insular environments such as deserts or abandoned museums. She often creates site-specific situations where she directs her actors to perform certain tasks or speak on a given theme, paying particular attention to female voice and subjectivity. Furthermore, the staging of her camera work zooms in on the way contemporary media dictate narrative creation that shifts incessantly between the domestic and the exotic, quotidian and supernatural.
Biography
Fang Lu
Born 1981, China
Lives in Beijing
Details
18 minutes
Video
Related
Telegrams, International