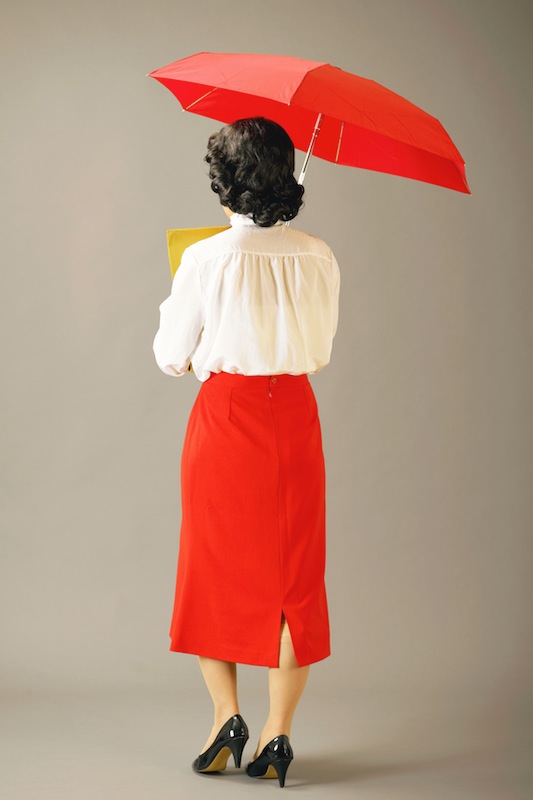 Office Lady With A Red Umbrella

Office Lady with a Red Umbrella restages a figure from a 1980 postcard made from a photograph from 1950’s. The retro-glamor of the 1950s style is restyled devoid of the original context of a Hong Kong street scene, where the “office lady” is walking on Queens Road of the Central district. With the “office lady” facing away from the viewer with a bare background, an introspective tone is created in Leung’s restaging while highlighting the red umbrella resonating with a red pencil skirt emblematic of the identity of the professional urban woman when Hong Kong was under British rule.

Leung Chi Wo tends to highlight in his art the boundaries between viewing and voyeurism, real and fictional, and art and the everyday. Leung is generally concerned with aspects of photography that are not strictly visual and often considers the local population and sites in his photographic installations to reflect a deeper critical engagement with globalization and global consumerism. Working often with pinhole photography and mixed media while exploring cityscapes, Leung focuses on the emotional expressions of the urban man through figural portraiture. Specifically, his photography captures the identity and politics of Hong Kong after its return to China in relation to his photographed subjects.
Biography
Leung Chi Wo and Wong Sara
Born 1968
Related