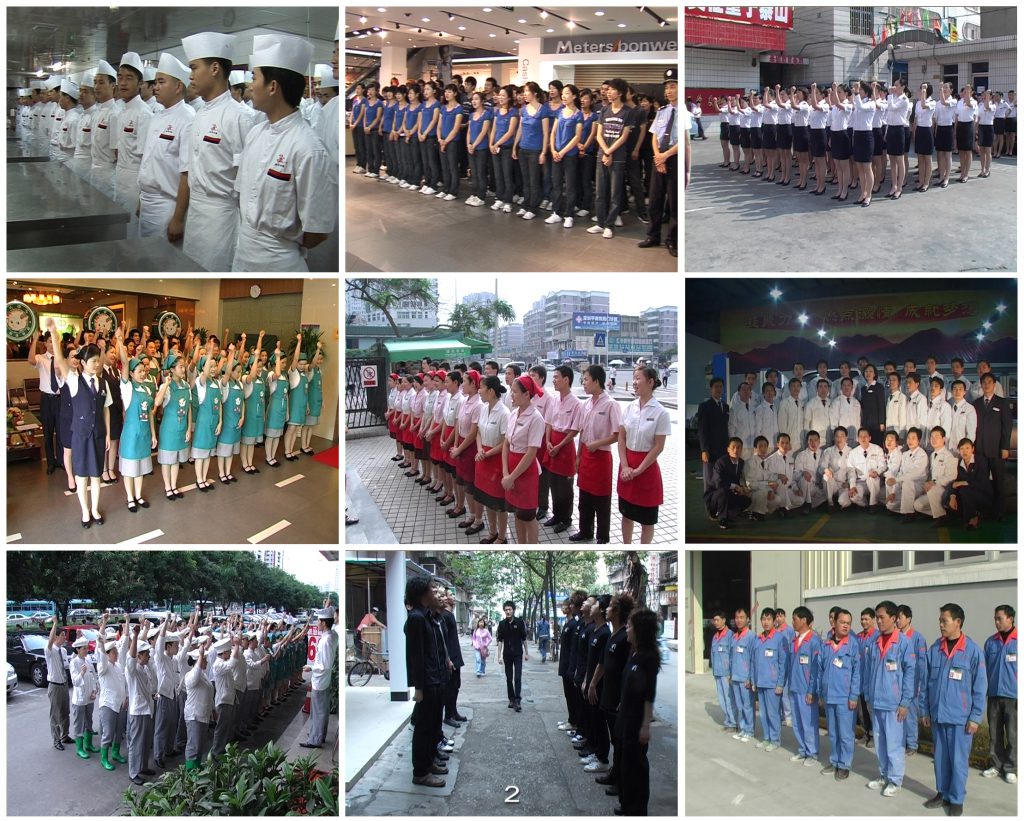 Created for the Seventh Shanghai Biennale at the Shanghai Art Museum, Zhou Tao’s 1,2,3,4 records morning staff meetings in over forty shops and companies in the immediate vicinity of the People’s Square. Regardless of occupation, the employees count off and move in step to the rhythms of their companies’ corporate songs or chants, which are meant to build team spirit and corporate loyalty. Zhou’s practice alchemizes the ordinary surroundings into a theatre where his camera is not simply a recording apparatus but an extension of existence. The images it produces are not just detached spectacles: They are the agents that reveal the theatrical details suffused in mundane life.

There is no single entry to the practice of Zhou Tao, who combines video with photographs, drawings and built environments to challenge our perception of any singular or real narrative or space. Through subtle and humorous interactions with people, objects, and environments, and through an intuitive editing process that creates a montage of scenes from various locations to appear as one, Zhou Tao’s videos invite us to experience the multiple trajectories of reality—what he calls the “folding scenario” or the “zone with folds.” The spaces he depicts are often transitional or in between: edges of roads, a concrete underpass beneath a bridge, overgrown plants in forgotten areas inside cities are often the protagonists. Also focusing on the communities that inhabit these spaces, his work lacks narrative but is instead rooted in the gaze of his lens, moving around nature, urban scapes and their dwellers, almost as a form of documentary. For him, the use of video is not a deliberate choice of artistic language or medium, instead the operation of the camera is a way of being that blends itself with everyday life. As the artist describes it he is influenced by a consciousness in performance which is then viewed through the moving image: “my relationship with reality and with the filmed image.” In his thoughtful and speculative approach his camera is not simply a recording apparatus but an extension of his existence and his active participation in the environments. The images it produces are not just detached spectacles: they are the agents that reveal the theatrical details suffused in mundane life.
Biography
Zhou Tao
Born 1976, China
Related
Zhou Tao, Paris
The Training, Paris
Zhou Tao: The Man Who Eats Pigeons, Paris
Zhou Tao, Paris