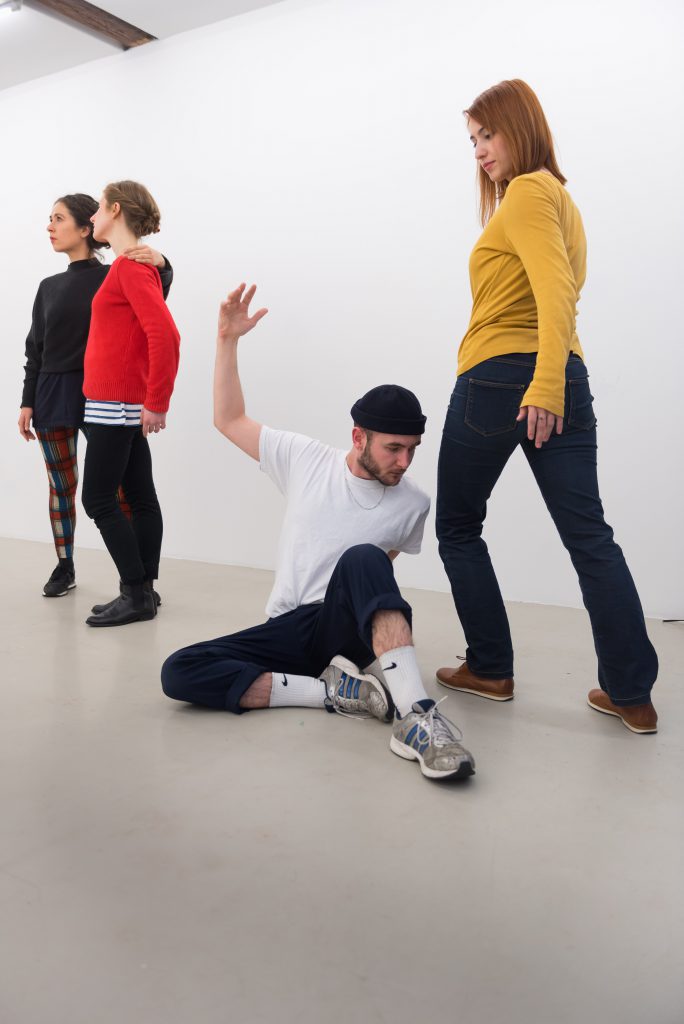 Furthering Alexandra Pirici’s enquiry into the economy and circulation of artworks, Parthenon Marbles is an immaterial version of the sculptural ensemble embodied by five performers. This ongoing performative action presents and addresses the challenges in the financial and legal implications and value of the original sculptures as cultural capital. The original Parthenon Marbles are a collection of Classical Greek marble sculpture inscriptions and architectural pieces that were originally part of the temple of the Parthenon and other buildings in the Acropolis of Athens, Greece. A major part of the ensemble is held by the British Museum and is known as “the Elgin Marbles”; other Parthenon Marbles can be found in different European museums including the Musée du Louvre in Paris. The Greek government has claimed restitution of Parthenon marbles since its independence from the Ottoman Empire (1832), resulting in an ongoing dispute regarding the diplomatic relationship between Greece and the United Kingdom. Pirici proposes an ongoing action commenting on this request of repatriation as a metaphor and an entry point into a larger discussion about capital, accumulation, circulation, redistribution and the role of the arts within the economy of today.

The piece proposes a performative repatriation, an immaterial version of the sculptural ensemble, to be embodied by performers in the Acropolis Museum at the site prepared for the originals. This action is complemented by research into the financial and legal implications of the sculptures’ situation: a speculative journey into a “what if” scenario of return, starting with statistics exemplifying the Parthenon Marbles importance for the future revenue of the institution, the touristic appeal of the city of Athens and their value as cultural capital. The textual layer performed is a result of the collaboration with curator and writer Victoria Ivanova, which looks at the work in relation to the financial concept of the derivative as a tool for identifying concrete but obscured socio-economic advantages of holding prized artifacts as well as a means for redistributing value through dematerialization/re-materialization and re-circulation.

The performative work of Alexandra Pirici (b. 1982, Bucharest, Romania, currently based between Bucharest and Berlin) addresses the political potential of aesthetics by connecting movement -- specifically, the body and its energy -- to a re-reading of historical and art historical narratives. She produces enactments, or living sculptures, with performers referencing existing sculptures or monuments in specific contexts. Her first actions in Bucharest occurred in the context of the economic crisis and continuous budget cuts for the arts; notably “If You Don’t Want Us, We Want You” (2011), which confronted the placing of human bodies in relation to heroic, sometimes controversial sculptures, or monuments in public spaces in Bucharest. Intended as a protest action against the state’s cultural policy, these interventions produced friction with playfulness and humor, de-monumentalizing official populist art with the live presence of the human scale. Central to her practice is the questioning of a performance’s function within today’s event economy. Through continuing to interrogate and enquire about the possibility of collective bodies in space and time, Pirici’s work attentively provides an important insight into the living and digital age.
Biography
Alexandra Pirici
Born 1982, Romania
Lives in Bucharest, Berlin
Details
Ongoing performative action
Related
Online Events: Things Entangling, International
Tokyo: Things Entangling, International
Hikaru Fujii: Les nucléaires et les choses, Paris
General Reharsal, International
General Rehearsal (Moscow), International
Recouvrir, ensabler, copier, traduire, restituer, Paris