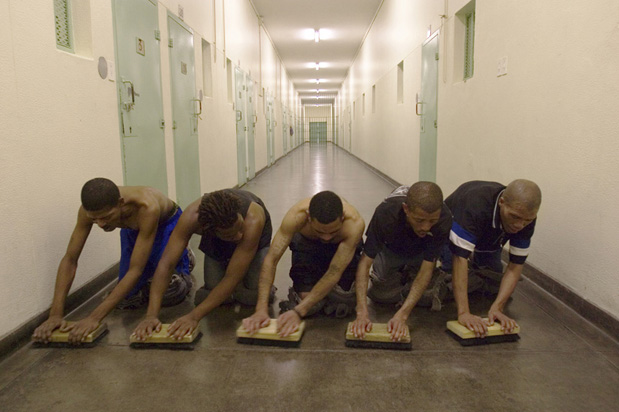 “Pasvang, Pollsmoor Maximum Security Prison” is the result of three months Subotzky spent inside the walls of Pollsmoor Prison, an overcrowded correctional facility largely controlled by gangs. Through talking to the prisoners and the warders, teaching classes in photography to the inmates and documenting his experiences, Subotzky captured a unique perspective of the prisoners and the prison itself. Subotzky was working digitally, and a key feature of the Pollsmoor work was panoramic images in which he would stitch together a number of shots to give a 360-degree view of the jammed prison wards and spaces. While the desperate sense of beaten down men, caged within a harsh institutional environment is prevalent throughout the Vier Hoeke series, there are nonetheless moments that show the survival of the human spirit, even under the direst circumstances. “Pasvang, Pollsmoor Maximum Security Prison” thus represents significantly more than a documentary insight into a prison, rather it is the documentation and culmination of Subotzky’s intervention undertaken in an attempt to understand and undermine power systems in South Africa.

Mikhael Subotzky’s (b. 1981, Cape Town, South Africa) film, video and photographic works examine the construction and internal structures of narratives concerning representation. His photographs and films frame the spontaneity of action and the stillness of portraiture through very precise compositions. Whether natural or artificial, the scenes are bathed in light that falls gracefully onto the grit and grime of interiors and exteriors alike. Subotzky’s work is very often a result of his immersion within communities and individuals traversing the penal system (Die Vier Hoeke - The Four Corners), everyday life in post-apartheid South Africa Umjiegwana (The Outside and Beaufort West) and the contemporary and historical structures of power. In publishing books alongside his exhibitions — Beaufort West (2008), Retinal Shift (2012) and, with Patrick Waterhouse, Ponte City (2014) — Subotzky’s oeuvre provides an invaluable insight into the power systems of South Africa.
Biography
Mikhael Subotzky
Born 1981, South Africa
Details
46,5 x 70 cm
Photograph
Related