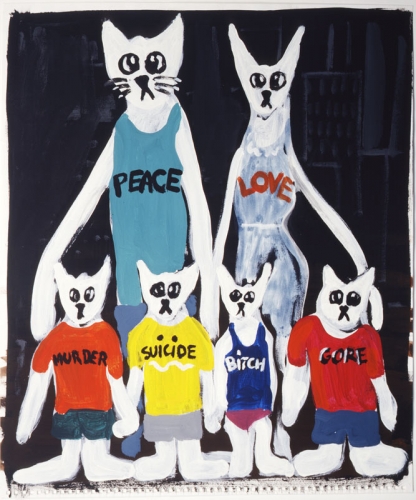 “To me, art equals responsibility”.  That is probably why Alain Séchas creates works according to the human scale, immediately evoking the human body. But rather than using the human figure, he chose that of the cat: a round-eyed feline which never smiles. ” Doing cats becomes like a trap, so that we identify a lot with it (…) and all the imagery of the cat reappears: the Egyptian cat, comics, caricature etc”.
Chosen as our anthropological equivalent, the cat plays various characters, often provocative, and becomes the intermediary between the artist and the viewer. More than a mere sculpture, he is a drawing with volume, a motif which endlessly changes: ” I have always said that my work was about drawing; a small drawing is as important as a large sculpture and its making is as difficult for me. » Falsely naive, the work of Alain Séchas stands out and opens our eyes, like his cat: « Forcing the viewer to see is to me the very definition of art », he says. With no complacency whatsoever.

Peace and Love shows a family with children who embody some of the typical calamities of society written on their T-shirt: “murder”, “suicide”, “gore” thus criticising the values of the generation of May 1968.

Alain Séchas was born in 1955 in Colombes, France. He lives and works in Paris.