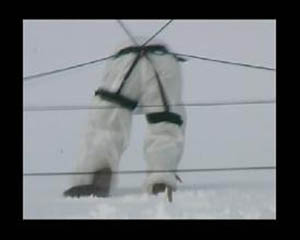 Perspective was filmed during a residence in northern Poland. The film is preceded by a series of photographs made ??in her studio. In a snowy landscape, the artist walks towards the horizon secured by ropes. The film records the appearance of a geometric construction that unfolds in space, but also the physical effort of the artist to create it. Finally, she reaches a climax when the strings form a perspective on the landscape. At the same time, freed from the studio, but still a prisoner of the ropes, the more she walks, the space extends further.  The piece features a physical struggle to reach the horizon, and the ideal point where the hypothetical perspective lines meet. The film reveals the impossibility of art to reflect both dimensions in a two-dimensional space as if the perspective tools developed in the Renaissance are no longer allowed to read the world.

Anna Molska uses video performance to explore the effect of artistic culture on the production of art. She rethinks the historical traditions of the Russian-Polish avant-garde in a question of the role of the artist who, beyond the organization of forms in space, participate in the construction of society. She questions the validity of art tools to produce new concepts and territoires.

Anna Molska was born in 1983 in Prudnik, Poland. She lives and works in Warsaw.