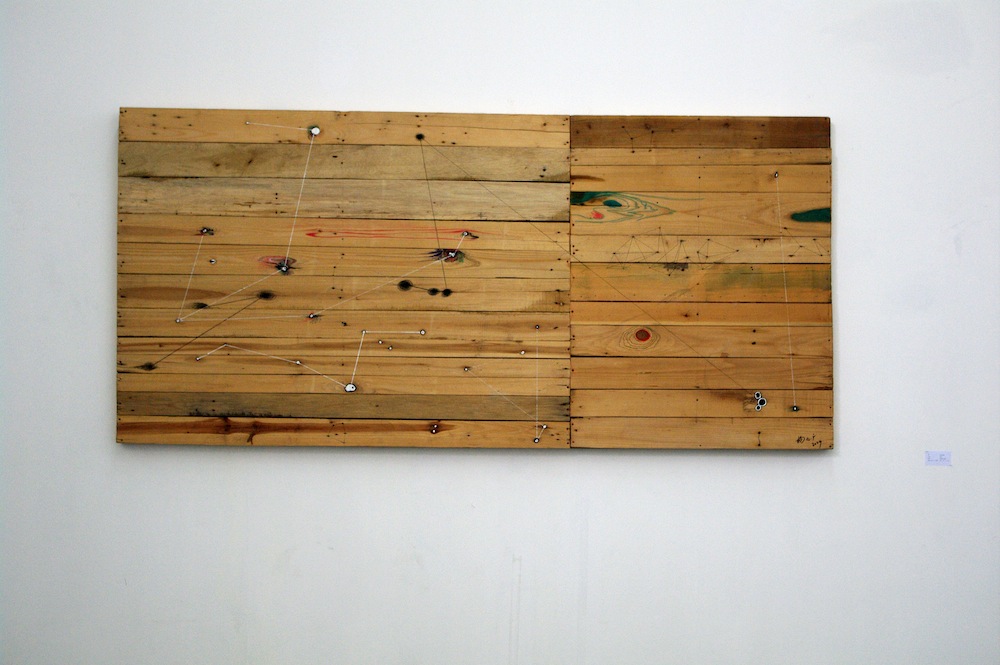 Although seemingly unadorned at first glance, Yang Xinguang’s sculptural work Phenomena (2009) employs minimalist aesthetics as a means of gesturing towards the various commonalities and conflicts between civilization and the natural world. Comprised of rudimentary planks of wood hammered together into a rectangular form, Yang’s work uses reclaimed materials from everyday life and seems deliberately in conversation with Arte Povera, the art movement that originated in Italy during the late 1960s where practitioners produced art from found and common materials as an act of resistance against the decided commercialization of the art world through market economies. Yang, by extension, pays close attention to his materials in attempt to release the forms within them rather than impose his own. He rarely adds anything to the materials that he uses; instead, he chisels, pares and scrapes the excess away, allowing his completed works to emerge through a combination of happenstance and almost meditative handwork. In Phenomena, Yang’s handwork becomes apparent in a constellation-like form scratched into the wood. Suddenly, the nails and knots in the wood’s surface become vertices in a larger web of connecting lines, suggesting the inexorable interconnections between our alternately fabricated and naturally occurring environments. Rather than privileging one over the other, Yang’s work invites us to contemplate these relationships and how these coessential phenomena define our existence.

Yang Xinguang is an artist whose work explores the interconnections between the natural world fabricated materials in a post-industrialist society. His work is deliberately restrained and frequently uses reclaimed materials such as found wood planks, a gesture that recalls the Arte Povera movement’s commitment to using un-rarified and common materials in art making practice. His work is also deeply invested in exploring the phenomenological relationship between viewers and artworks, and his sculptural installations gesture towards Minimalist traditions, inviting viewers to pause and consider their own relationship to their surrounding space. Yang is a graduate of the Central Academy of Fine Arts in China. He has exhibited extensively throughout China and has had international exhibitions at venues such as Artissima, Turin, and Art 41 Basel in Switzerland.
Biography
Yang Xinguang
Born 1980, China
Related