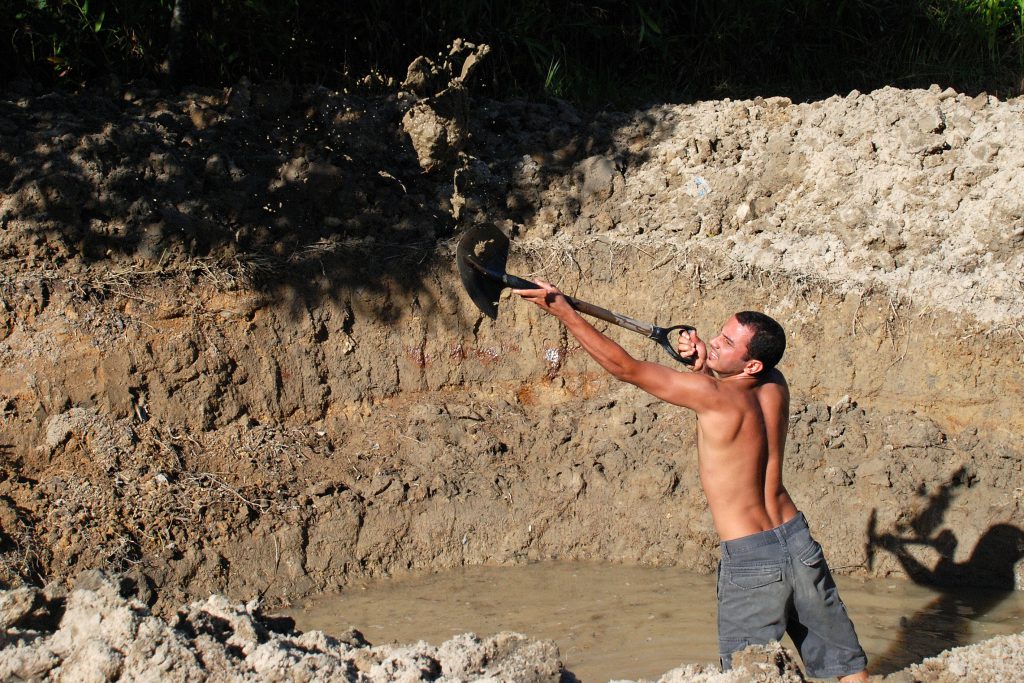 Braga’s video work Provisão (2009) opens with a still shot of a clearing in a forest, shoots of grass emerging from a muddy brown patch of seemingly dry and barren earth. As the camera fades to black, the viewer hears the repeated sound of a shovel striking dirt. The camera fades back to the clearing and zooms in on a shirtless man digging up the ground. The hole grows wider and deeper as he digs, becoming an almost crater-like expanse filled knee-deep with ground water. The man emerges from the hole and begins to chop the base of a tree next to the hole, hacking away with deep and repetitive strokes until the tree begins to fell and eventually collapse into the massive cavity beneath. A symbol of life and growth, the tree’s collapse is achieved solely by pushing one’s strength to an absolute limit. He emerges from the hole again and begins to shovel the dirt back in, burying the tree under a seemingly endless and inexhaustible pile of earth until it is fully covered, its branches and leaves submerged. The metaphors here between destruction and nature are difficult to ignore. At once both poetic and unsettling, Provisão offers a cautionary tale about the harmful impacts of human interventions on the environment.

Born in Manaus in the heart of the Amazon rainforest, Brazilian-born artist Rodrigo Braga confronts the natural world head-on. His video and media-based work are centered on these encounters that place him at the focus point of the work, between the human condition and the animal kingdom. Braga's performative practice reveals itself through photography that deals with his relationship with landscape and animals. For Braga, the body is the medium of which he exposes the limits. Power dynamics, weakness, life, death, struggle, submission, domination and masculinity come to play in his practice of photography, video and installation. He tests his limits with any beast, exposing carnal instincts with a calibrated approach. Braga has exhibited internationally including the 30th São Paulo Bienal, The Imminence of Poetics (São Paulo, 2012); From the Margin to the Edge, Somerset House (London, 2012); Mythologies, Cité Internationale des Arts (Paris, 2011); and Giant by nature, IVAM – Instituto Valenciano de Arte Moderna (Valencia, 2011).
Biography
Rodrigo Braga
Born 1975, Brazil
KADIST VIDEO LIBRARY
Login to watch video
Related