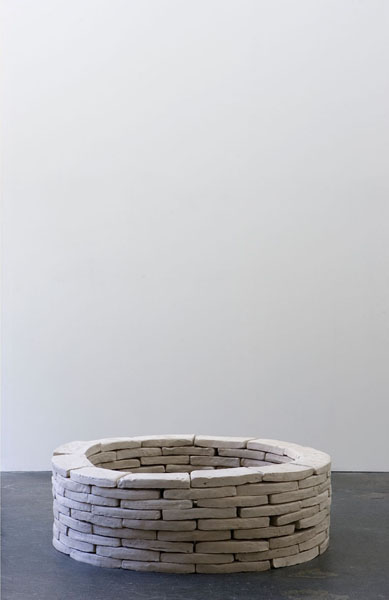 Puits (“Wells”) is a circle made ??of raw earth elements, at the scale of Leblon’s hands. In this work, Guillaume Leblon reclaims the tactility of clay, as a classical material of sculpture, which we can also see in his other works like Raum (2006), National Monument (2006), and Notes (2007). Puits (“Wells”) suggests a universe of the past, like the 700 wells of Mohenjo-daro, the thriving Indus city from the second millennium BC (Pakistan, cf. Link). In the case of Guillaume Leblon, this form is a reminiscencence, as developed by Aby Warburg, whose forms survive and reappear through the ages and places. This work points toward the idea of wells, mimicking their shapes, while questioning their use. This well is not functional and resists to water. Its hole is replaced by a space enclosed with brick. Maybe the well is a metaphor of the opening artist’s studio to the world? The artist introduces a sense of fragility between unstable equilibrium and the threat of collapse.

Guillaume Leblon is a sculptor, who questions the vocabulary of forms – he uses material encompassing  copper alloy of tin and zinc, flows like water, lightning, smoke, and space to express notions of landscape and weightlessness. During an exhibition at Sonsbeek in the Netherlands, Leblon proposed the work "Temps libre" (Free Time) (2001), a jump from three floors of the tallest building in Arnhem. His works function as indices, in form, references or emotions, creating a very special atmosphere which reflects his interest in modernism that he defines as "a total art that includes a real time." In Leblon's work, perception of space by the viewer is often precarious and ambiguous due to subtle alterations.
Guillaume Leblon was born in 1971 in Lille, France. He lives and works in Paris.