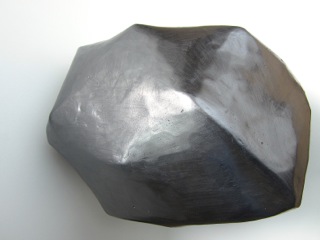 With Roca Carbon (Charcoal Rock, 2012) and Roca Grafito (Graphite Rock, 2012), López plays with our relationship to inert and unremarkable objects such as rocks. Traces of art history reverberate through the sculptures; their mediums reflect traditional materials for drawing and sketching, and the simplicity of their forms gesture toward minimalism. But López dislocates these common objects from their ordinary utility by replicating their component parts in paper, graphite, and charcoal, thus drawing attention to mechanisms of representation and translation.

Though he often works with paper and traditional techniques such as lithography, Mateo López is interested in expanding the scope of drawing and frequently operates outside of traditional studio situations to conjure personal experiences. His early studies in architecture equipped him to consider his medium in terms of time and space, and in three rather than two dimensions. The portability of López’s methods, along with his personal approach to collecting information from his personal journeys, has become a trademark of his installations. Drawings and trompe l’oeil objects, ranging from apples to clothing hangers to doors, extend beyond their sources of inspiration as sensuous entities, creating their own life in a Proustian narrative.
Biography
Mateo Lopez
Born 1978, Colombia
Related