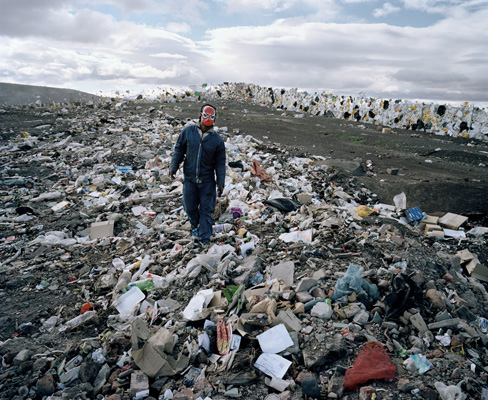 At the halfway point along South Africa’s Highway N1, running from Cape Town to Johannesburg, sits the small town of Beaufort West. The 1,200-mile highway joins the northern provinces of the country to the south cuts through. Beaufort West becomes the main strip of the township, whereby the thousands of commuters passing through are thus forced to witness the town’s squalid social and economic condition. “Samuel (Standing), Vaalkoppies (Beaufort West Rubbish Dump)” is a reflection of economic reality of Beaufort West, where Subotzky spends a significant amount of time with the lesser fortunate black residents to understand the conflicted reality of existence in this pass-through town. The photograph quickly sweeps the viewer into the lives of the marginalized; the trash pickers at the local dump while simultaneously referencing the white citizens at a livestock show, the households that set up makeshift taverns, prostitution of the truck drivers, and the prison, housed centrally in the township. What seems to be an endless landscape of rubbish, leading into the sky, Subotzky’s central figure wearing a Mexican wrestling mask, is a confronting challenge for recognition and change of the aftermath of the South African apartheid and economic disaster.

Mikhael Subotzky’s (b. 1981, Cape Town, South Africa) film, video and photographic works examine the construction and internal structures of narratives concerning representation. His photographs and films frame the spontaneity of action and the stillness of portraiture through very precise compositions. Whether natural or artificial, the scenes are bathed in light that falls gracefully onto the grit and grime of interiors and exteriors alike. Subotzky’s work is very often a result of his immersion within communities and individuals traversing the penal system (Die Vier Hoeke - The Four Corners), everyday life in post-apartheid South Africa Umjiegwana (The Outside and Beaufort West) and the contemporary and historical structures of power. In publishing books alongside his exhibitions — Beaufort West (2008), Retinal Shift (2012) and, with Patrick Waterhouse, Ponte City (2014) — Subotzky’s oeuvre provides an invaluable insight into the power systems of South Africa.
Biography
Mikhael Subotzky
Born 1981, South Africa
Details
105,5 x 128,66 cm
Photograph
Related