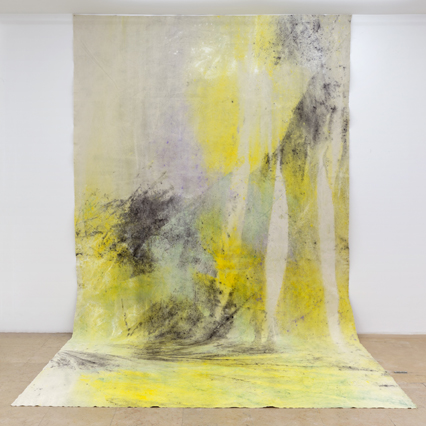 The ongoing “Sea Paintings” series is central to the practice of Jessica Warboys. The series plays with the notion of ritual, performance, nature and consequence. The artist realises her “Sea Paintings” on the Zennor coast, near St Ives, where she emerges the canvas in the seawater, allowing the waves and the wind to mix the raw mineral pigments that have been applied by hand to damp folded canvases. Finally the artist drags the canvases across the sand, leaving a trace of the movement of the artist in the canvas. The combination of the raw mixed pigments with the wind and the waves produces vivid final pieces. They are the result of a long process of walking, her relationship with the landscape and her practice of painting as a poetic performance. The result is a series sumptuous floor to ceiling colour canvases that revise the Western tradition of landscape painting.

Employing a variety of media including film, sculpture, ceramic, photography, found objects and sea paintings, Jessica Warboys (b. 1977, Wales) concerns her practice with historical, mythical and fictional collective memories. At the foundation of her analysis of collective memories, the artist builds a new universe in which the viewer can reconsider the past and constructed knowledge. While her works present a performative aspect, the artist does not consider herself a performing artist. Rather, she is interested in the tension at the junction and transition between ritual, performance and the artistic process.
Biography
Jessica Warboys
Born 1977, UK
Details
475 x 285 cm
Related
General Rehearsal (Moscow), International