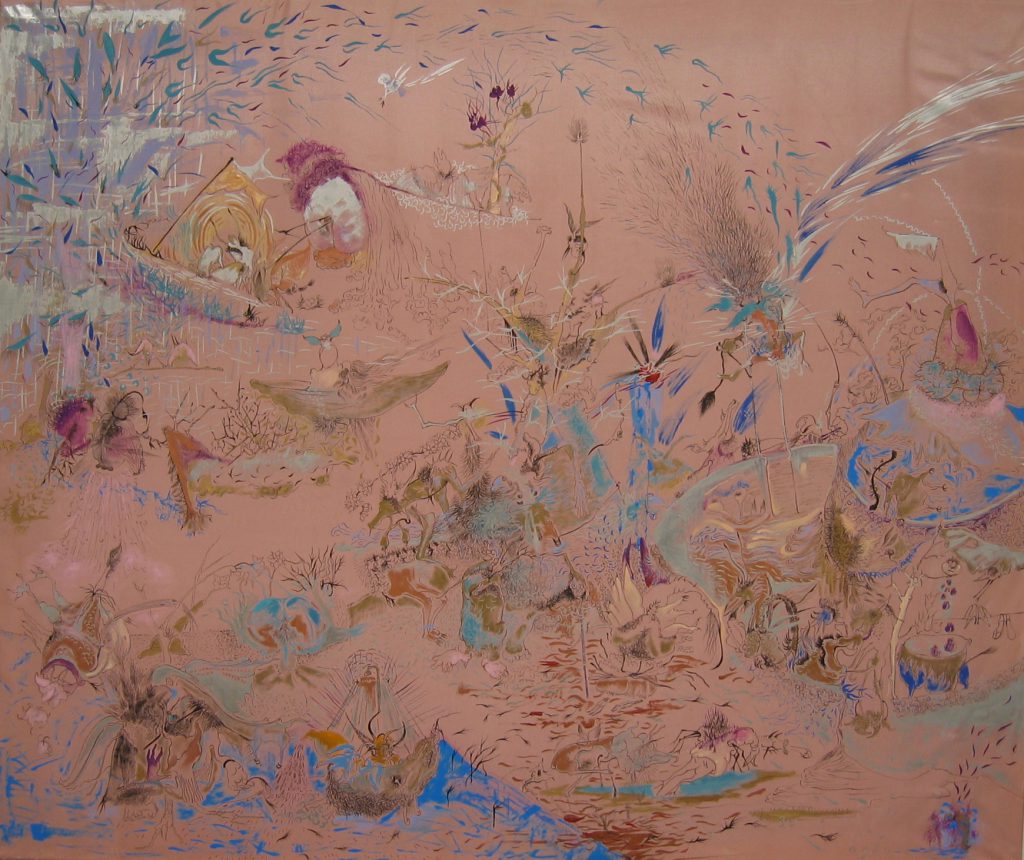 In Seven Deadly Sins (2006), Shen utilizes abstraction to produce complex topographies of color that evoke associations with violently tumultuous landscapes. Streaks of blue and burgundy paint scatter across a peach colored silk backdrop, dripping into rough floral and botanical forms. At once both diffuse and dense, Shen’s compositions feel both expansive and contained, the colors overlaid atop another with a seemingly free spontaneity that belies more ordered and considered deliberation. Chains of short blue brushstrokes begin to suggest rivers, while sweeping bows of white and goldenrod paint resemble sheaths of wheat. The seemingly bucolic scene, however, is stained throughout with mottled red drops that resembled blood dripping across the earth. Suddenly, an amorphous white blot in the upper right corner becomes reminiscent of a decapitated head, an abstracted but terrifyingly violent reminder of the work’s title. In gesturing towards Judeo-Christian beliefs in the “seven deadly sins,” Shen reframes her work in response to a specific set of cultural histories and traditions specific to Western religions. But if her title alludes to a particular faith, her work responds to a broader set of concerns with examines how individuals exist and coexist within constantly changing environments. For Shen, painting serves as “a form of meditation,” as she describes it, “freeing the mind from everyday life” in order to blur the “between illusion and reality.” Her practice is deeply invested in reconciling the “tensions” that fragment our lives with our constant efforts to bring order through repetition and ritual. Shen’s mark making is more than just pictorial – it is a means to restore a more grounded rhythm to a chaotic world through creative expression.

Ruijun Shen conceptualizes her painting-based practice as a form of extended meditation and a means of processing tensions between time and space in the world around us. Inspired by Confucianism and Tao Chinese philosophy, her work is deeply invested in exploring the various connections that define our everyday. Shen received her MFA from the School of the Art Institute of Chicago and has exhibited extensively throughout China as well as internationally.
Biography
Ruijun Shen
Born 1976, China
Related