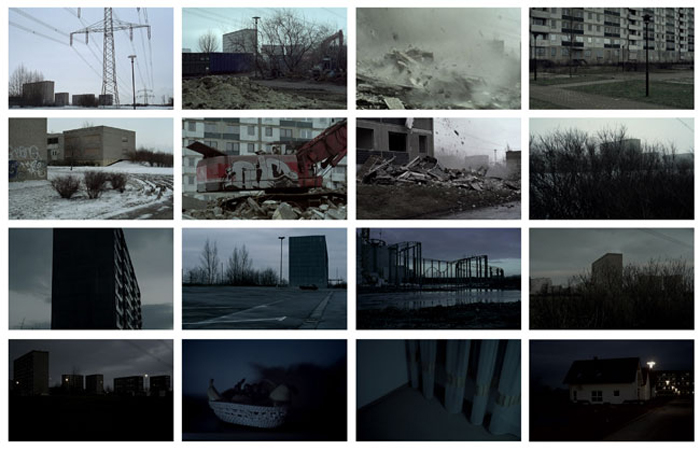 Silberhöhe, directed at Halle, located in the former GDR (German Democratic Republic), is the name of a neighborhood on the outskirts of the city, which was built in the 70’s and could accommodate more 40,000 people. The opening of the film presents us with a dramatic process that transforms the documentary image. The lack of human presence makes creates a strange atmosphere in the film. A street lit by streetlights pays homage to the film “The Eclipse” by Antonioni, of which we can also see an of the end of television in an empty apartment. Time is also treated by Von Wedermeyer as a transition from night to day, from darkness to light. In the second part of the film the abandoned buildings are seen more clearly, more or less demolished. Buildings being demolished not only speak of a crisis, but they also reflect a process of change during a modernist utopias’ dissipation. There has been consideration of the failure of older systems, and changes of political regimes.

Clemens Von Wedemeyer is certainly one of the artists of his generation that make intelligible our relationship to reality through the use of different transmissions of images, whether through film or video. The artist employs the documentary genre as a method in his analysis of reality. However, his use of fiction gives us the opportunity to examine different images. Referencing the work of Antonioni with "Silberhöhe", he puts us in a genealogy of directors who have also questioned the complex relationship between fiction and reality. If the video "Silberhöhe" gives us clues to understanding some aspects of reality, the poetic dimension of the artifices of fiction offer more complex visions of the world.
Clemens Von Wedemeyer was born in 1974 in Göttingen, Germany. He lives and works in Berlin.