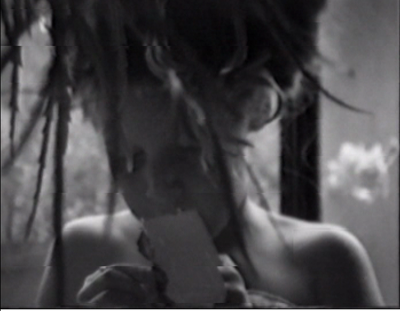 Talking Head is a short film in black and white of Auder’s daughter Alexandra, hidden behind a hemp plant, playing with a plastic wrapper and babbling in an imaginative way. The viewer is uncertain whether Alexandra knows she is being filmed but given that Auder was constantly filming she was probably oblivious to it. Her statements make little sense to the outsider : ‘The thing never came back again. It wasn’t the same thing. That thing. Was nice.’ But to her it seems to represent some imaginative narrative connected to the peeling back of the plastic wrapper. The viewer of the film feels as though he has been admitted to her innermost mind, the unconscious. The informal documentary nature of Auder’s films has had wide repercussions in terms of contemporary film making. This kind of low-tech practice informs the work of such artists as Steve McQueen and Gillian Wearing and ran parallel to the fly on the wall practices of documentary filmmakers in the 1970s such as Ken Loach. The acquisition of works by Auder provides a reference point for a number of works in the Kadist collection (Laumann, McAlpine, Menick etc).

Michel Auder was born in 1945 in Soissons, France. He lives and works in Brooklyn.