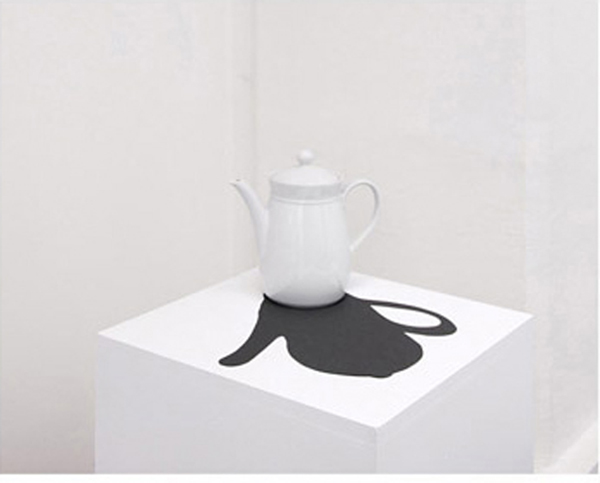 The types of objects Feldmann is interested in collecting into serial photographic grids or artist’s books are often also found in three dimensional installations. Against authorship and the commodification of art, he never gives titles or dates to his works which have infinite edition possibilities. This mise en scène of found kitchenware also exists with a rounder and flatter plain modern white porcelain teapot.
The mode of display is paired down to the simplest form of a plain square plinth that nevertheless conveys artistry, as does the addition of the cut piece of cardboard signifying a shadow. This recalls his large scale actual Shadow Play for the Venice Biennale in 2009. Feldmann has described his memories of working as a waiter and the lasting impression of the chairs propped up on the tables at the end of day and left the art world in the 1980s to work in a gift store with his wife. work, like hat with photoand pair of shoes also in the collection, is loaded with art historical references and irreverence through a simple assembly of an object and a classic artistic trick.

Hans Peter Feldmann was born in 1941. He lives and works in Dusseldorf.