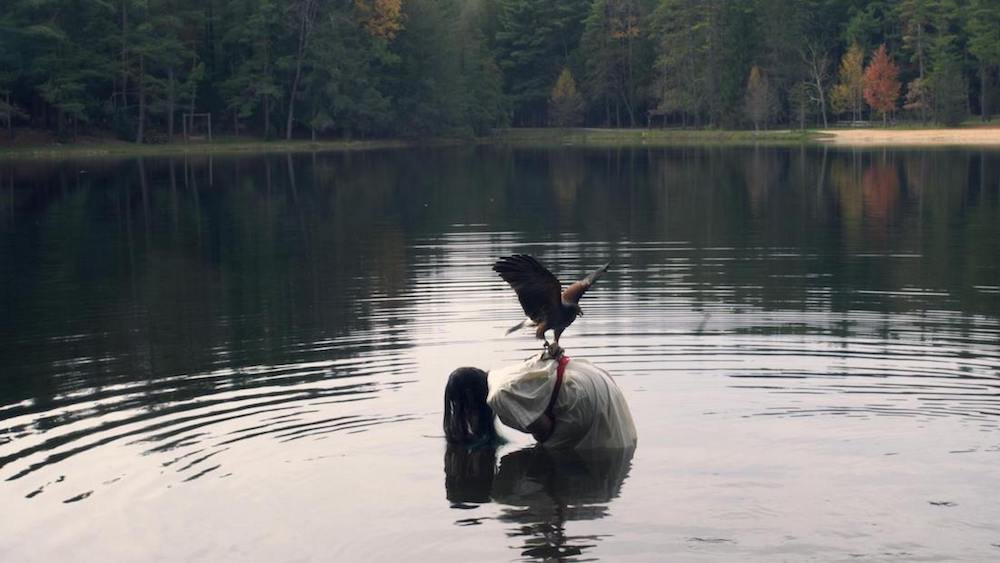 The title of Alicia Smith’s work, Teomama, means “God Carrier” in the Aztec language Nahuatl. It was the name given to medicine men and women who carried the bones of Huitzilopochtli—the god of war, sun, and human sacrifice in ancient Mexico, and the national deity of the Aztecs. Of the many legends featuring Huitzilopochtli, the origin story of Tenochtitlan (present day Mexico City) is perhaps one of the most well-known. It is said that he instructed the Aztecs to abandon their home in Aztlán and seek a new place to settle. The Teomamas carried their medicine bundles for 200 years down into Anahuac (a drainage basin that formed the ancient core of Mexico) looking for a sign they had arrived in their new home. They finally saw it when they reached Lake Texcoco: an eagle devouring a snake on a prickly pear cactus. A symbol of the union between sky and earth, a place where it was safe to build their city. And now, the image is widely recognizable as the coat of arms on the Mexican flag.

In the video, the artist acts as both Teomama and Tenochtitlan. She stands thigh-deep in a tranquil lake, while insects buzz in the background and fish intermittently breach the placid surface of the water. Bent at the waist, her torso hovers over the water unmoving, her hair and garment disappearing into a reflection of themselves. The long white dress is cinched at the waist with a belt similar to those worn by the Aztec priests, and her bent body acts as the island of Tenochtitlan; she is land, an offering plate, and carries god on her back. Her posture is one of abjection—an embodiment, Smith says, that has been long understood by her ancestors as a tool for accessing the sublime.

Art history is filled with attempts to capture the sublime: sweeping vistas of “uninhabited” forests, mountains, oceans, and meadows that depict the crushing power of a nature too wild to tame or understand. These are encounters characterized by a deep sense of wonder and awe. The idea of the sublime, too, is at the center of historical colonial narratives that seek to

Alicia Smith is a Xicana artist and activist. Her work uses the abject and sublime to investigate ideas related to the tension between greed and reverence, and its impact on the environment and our relationship to the female body. Through the use of video, performance, printmaking, and sculpture, Smith seeks to dissolve romanticized tropes that deny indigenous women their complexity, while at the same time demonstrating their beauty and strength. Smith describes her artistic practice as a means of unpacking her complicated relationship with her mixed-race heritage, the land, and her body, which she does depicts through powerful visual imagery.
Biography
Alicia Smith
Born 1962, USA
Lives in Albuquerque, NM, United States
Details
5:41 minutes
Single-channel video, color, sound
KADIST VIDEO LIBRARY
Login to watch video
Related