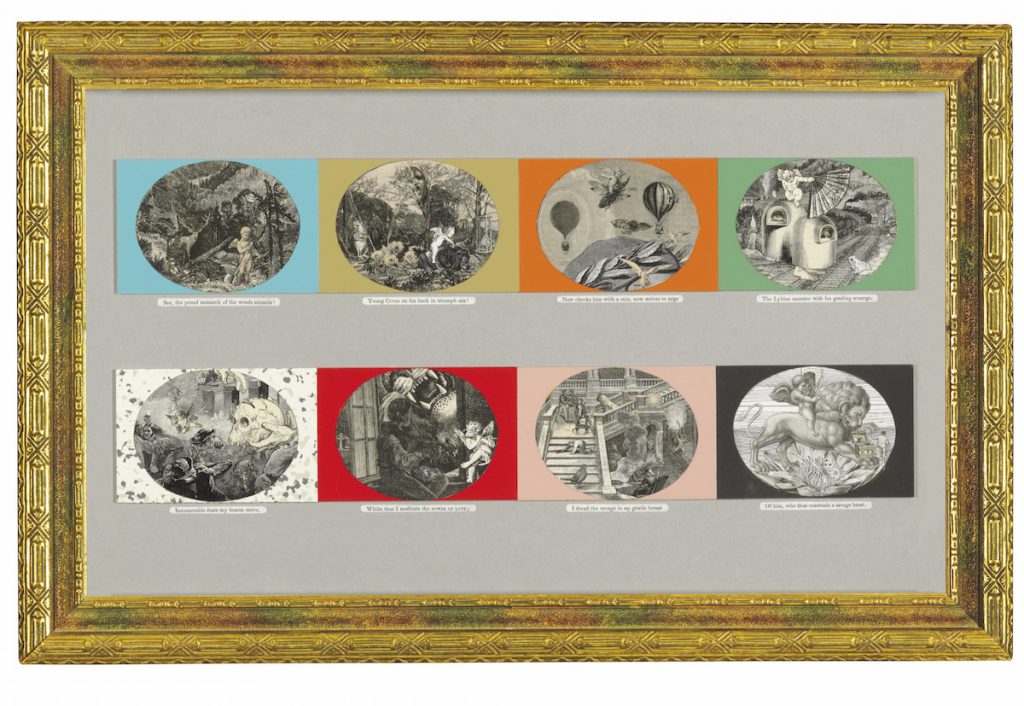 The Antique Gem is a collage by Jess comprised of eight fantastical scenes featuring the Cupid as its central protagonist. The title of the work and the oval shape of these scenes, refer to ancient engraved gems, a form of fine art dating back thousands of years B.C. Underneath each of the scenes we can also see lines from a poem, which the artist cut out of the book Gems: Selected from the Antique—a 1804 publication by British painter and illustrator Richard Dagley that is considered an important document for the study of engraved gems and a historical artifact itself. The original poem, as Dagley explains in the publication, is an ancient Greek epigram by Aulus Licinius Archias found engraved in a sardonyx (a variety of rock-forming mineral) gem depicting the figure of Cupid curbing a lion. Echoing the poem and the gem itself, Jess’ collage typifies the power of love, as we see Cupid (or Eros) subjugating all nature—a lion, giant insects, and other surreal characters among them. Jess’ The Antique Gem connects antiquity to the present by bringing together various interpretations of one of the most essential human emotions: love.

Jess Collins (most commonly known as Jess), is a celebrated San Francisco artist known for his highly symbolic paintings and layered collages that combine imagery from mythology, alchemy, popular culture and the male body. He originally studied chemistry, and after being drafted into the military at a young age, he worked in a plutonium mining project for manufacturing atomic bombs, and later in a project focusing on atomic energy. His growing concern for the threat that atomic weaponry posed to our planet is said to be one of the factors that led him to abandon his work as a scientist to pursue art full-time. Jess then became a pivotal figure of the Bay Area’s artistic and literary scene, not only through his work as an artist but through his lifelong romantic partnership and artistic collaboration with postwar American poet Robert Duncan. Akin to Duncan’s idiosyncratic poems, Jess’ paintings draw on myth, occultism and religion, often expressed through the dense layering of found images sourced from book illustrations and comic strips that the artist salvaged during his frequent walks around San Francisco’s thrift stores and book shops.
Biography
Jess
Born 1923, USA
Details
14 1/2 x 22 1/4 inches
Printed paper collage
Related