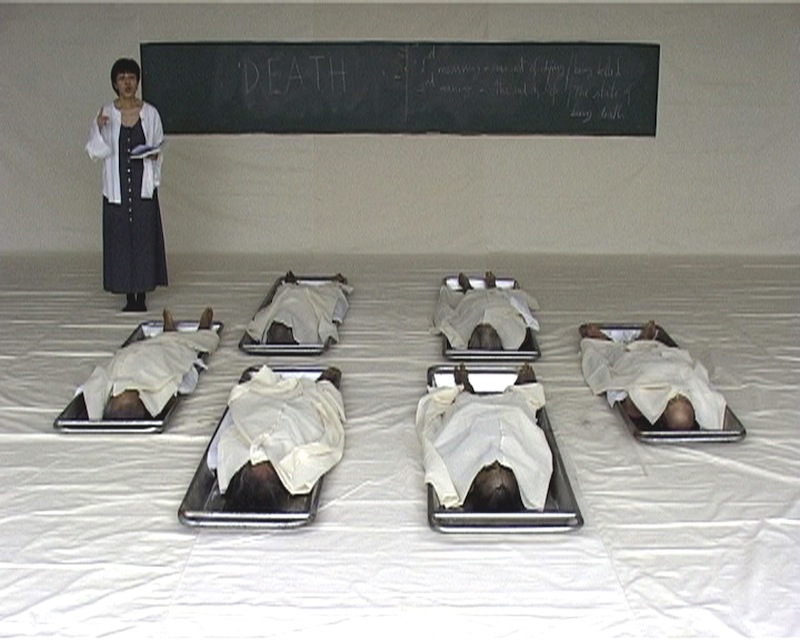 The Class (2005) by Araya Rasdjarmrearnsook challenges the viewer’s personal sense of morality and tolerance by depicting a classroom from hell. In the video, a woman, dressed in black with a white over shirt, stands in front of a long blackboard. The classroom’s rear walls and floor are covered in taut white fabric, given the room the sinister appearance of a sanitarium or a crime scene. Six bodies lay across the floor on silver morgue trays, their features all but obscured by gently draped white sheets. The woman at the front of the class begins to lecture to the lifeless bodies with a clear and calm diction. As she turns to address the rear wall, she grabs the chalk and writes her topic on the blackboard: death. She then proceeds with her monologue, discussing how death is addressed and approached from various historical, cultural, and philosophical perspectives. She occasionally addresses the lifeless bodies, imploring them to share their own perspectives and experiences. She continues to speak, undeterred by the lack of response or reciprocity. Deliberately absurdist in its premise, Rasdjarmrearnsook’s video parodies pedagogical conventions, and the metaphor here of the corpse-as-student plays off humorous tropes of being literally “bored to death.” But in opening a conversation about death – which is often considered too taboo to casually discuss in many cultures (and particularly in the West) – Rasdjarmrearnsook also questions how we treat conversations around mortality in public discourse and how those dialogues, while vital, all too often fall upon deaf ears until it is too late.