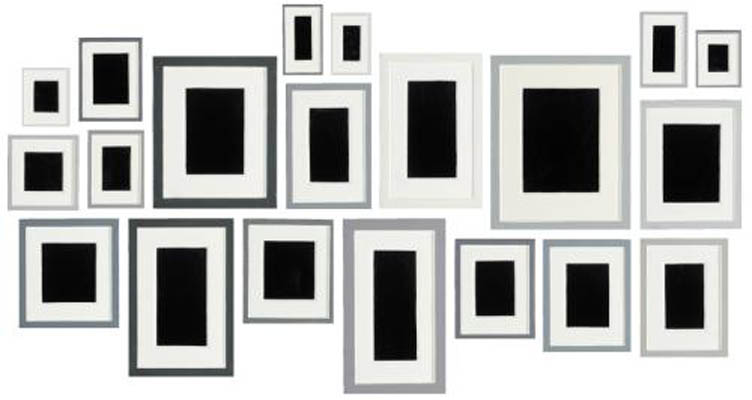 In the work titled The Glossies (1980), an affinity for photography manifested itself before McCollum actually began to use photography as a medium. The Glossies are drawings, rectangular forms applied with blank ink and watercolors, which fill up the sheets parallel to the edges except for a small margin. Finally, the whole paper is covered with an adhesive plastic laminate, which gives it the shiny surface of a photograph. The drawing as original artistic expression is employed as a sign for photography. In this respect, The Glossies marks a decisive transition to the “Plaster Surrogates”, a multi-phase work, which McCollum began to create in 1982.
Discussing the Plaster Surrogates in a 1985 interview, McCollum described his practice as “a sort of ‘working to rule’”: a job action in which workers do precisely and only what is required contractually, both refusing excess work and excessively observing rules and regulations. “In a sense, I’m doing just the minimum that is required of an artist and no more.” Each and every Surrogate is signed dated and numbered. Although McCollum works with assistants, he insists on painting the outer edge of every black center and the inner edge of every border. No two surrogates are identical; all those of the same dimensions have slightly different colored borders and vice versa. There is nothing false about the objects themselves. McCollum doesn’t employ illusionism or trompe l’oeil. His Surrogates aren’t forgeries of paintings. They’re not even paintings – only plaster objects, which may, at a distance, resemble framed images. The artist proceeded to hang his Surrogate Paintings in larger groups and in a relatively order less way, side by side and one beneath the other. By his increase of quantity and the effect of repetition, he intended likewise to interpret this exaggerated idea of an installation as a sign and to exclude any kind of view, which emphasizes the importance of the single picture. The surrogates, via their reduced attributes and their relentless sameness, started working to render the gallery into a quasi-theatrical space which seemed to “stand for” a gallery; and by extension, this rendered the artist into a caricature of the artist, the viewers performers.