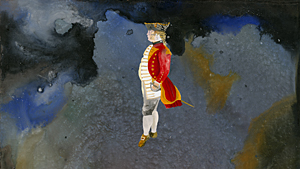 The Last Post was inspired by Sikander’s ongoing interest in the colonial history of the sub-continent and the British opium trade with China. In this animation, layers of images, abstract forms, meaning, and metaphorical associations slowly unfold at the same time that more visual myths are created. The identity of the protagonist, a red-coated official, is indeterminate and suggestive of both the mercantilist policies that led to the Opium Wars with China and the cultural authority claimed by the Company school of painting over colonial India. Though situated in a particular historical context, The Last Post remains an open-ended narrative with infinite possible interpretations. The work’s scope and complexity is expanded further by its sound element, which was created by Du Yun, an artist and composer based in New York City.

Shahzia Sikander is known for her richly layered and intricately detailed graphite, ink, and gouache paintings. She studied miniature painting in the late 1980s at the National College of Art in Lahore, Pakistan, with the forms and techniques of Indo-Persian miniatures heavily influencing her approach. Sikander’s practice explores the concepts of “East” and “West,” using traditional strategies of storytelling and themes of popular mythology to deconstruct the postcolonial legacy of the Indo-Persian region. In 2001, Sikander began to employ digital animation to create video works based on her drawings. Her practice traverses painting, drawing, animation, installation, and video, to radically rearticulate the tradition of miniature painting. Sikhander uses the technique to address contemporary issues, including the Western fear of Islam, the globalization of Western ways of living, and gender identity, focusing specifically on Muslim women in the West. The artist’s use of a traditional and scholarly approach to discuss the conflicts in the global condition creates a unique oeuvre--the digital animations, breathing new life into Mughal-era miniature painting.
Biography
Shahzia Sikander
Born 1969, Pakistan
KADIST VIDEO LIBRARY
Login to watch video
Related